Many want to know how the 'Binnelanders' team made actor David Viviers’ leg look so real after his character Liam’s leg was amputated due to a rock-climbing accident in the Drakensberg. 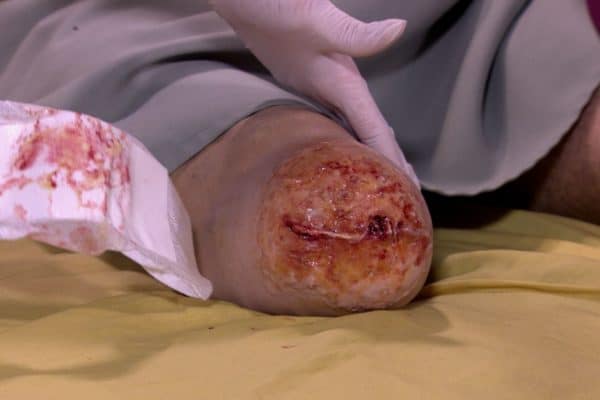 Binnelanders fans met Liam Vorster (David Viviers), just as his badly hurt leg had to be amputated and he believes the doctors made this life altering decision without his consent. The drama and special effects that came with Liam’s storyline, called for some impressive skills behind the scenes.

Viviers says that when he read the script, he liked Liam’s emotional journey.

“He goes through a lot of emotions in a short time, and we see how he slowly starts to open up.”

Apart from Viviers having to live himself into the role, portraying Liam’s struggle with abscesses, infection and phantom nerve pain, Binnelanders’ hair and makeup department also had to work closely with the art and wardrobe departments to create an amputated leg that looked as real as possible.

“We had to do a lot of communicating and a lot of tests beforehand” says Jessica van Kerkhoff, Binnelanders’ senior make-up artist who is also involved in the behind the scenes special effects of the Afrikaans soapie.

Viviers says there was a lot of clever camera work involved as well and that his hospital bed had been customised with a hole in which he hid his real leg.

ALSO READ: What you need to know about new Afrikaans romcom, ‘Kaalgat Karel’

Raqual Ogle, head of make-up and hair at Binnelanders, says that they had to work hard to make the prosthesis blend in with Viviers’ leg’s colouring. Jessica adds that they used different kinds of silicone and alcohol-based paints to match his leg with the prosthesis.

The prosthesis was made by Hollywood Costumes – complete with leg hair and all – and the make-up team just had to add the abscess and make sure that it matched with his real leg.

According to Viviers, Liam is initially very mad and depressed, and he has given up on life.

“For me as actor, the challenge was to let [Liam’s] humanity shine through underneath the anger and to not just play anger. I think he is actually a gentle person with big dreams.”

Viviers says that he enjoyed the challenge of playing Liam.

“It was the first time that I had to play a person who had to go through physical trauma.” \He says it was different in a sense as most of the scenes played off in a bed or a wheelchair.

“As actor, I had to go through his emotional journey with limited movement.”

As Karen (Luandri Reynders) – the one nurse who bites the bullet and sees through his anger – takes responsibility to clean Liam’s wounds, she wins his trust, and he starts opening up to her. Viviers says he believes that viewers are expecting this newly found friendship to evolve into something more.

“There is also a big decision that lies ahead that might change his life,” says the actor.

Viviers says that he enjoys travelling across South Africa as much as his Binnelanders role, Liam does.

“Especially the Karoo and to search for towns in the middle of nowhere like Sutherland, Matjiesfontein and Nieu-Bethesda.”

The actor will be involved in the filming of a new Showmax series from next month.

“It’s a comedy, so I am looking forward to the change of scenery,” he says.

He has also just finished writing a novel, which is due to be launched next year.