Change: Current rule does not level the playing field

Performance has highlighted a flaw in the “spirit” of the rules of racing. Regular readers of this column will know I’ve been emphasising the advantage for punters of having a 4kg claimer on any horse they back and that has been highlighted by the success of Lyle Hewitson over the past few weeks.

He has done an exceptional job, there is no doubt about that, but his performance has highlighted a flaw in the “spirit” of the rules of racing. Racing is about handicapping and the handicapper’s task is in theory to have all runners of a race finish in a straight line. The reason apprentices were given a 4kg claim was to help them compete against the more experienced jockeys and assist them during the process in which they learn how to ride a race. In other words, the claim is there in an attempt to level the playing field.

As you become more experienced and ride more winners the allowance drops to 2.5kg and then 1.5kg.

But unlike all the other youngsters who began their apprenticeship at the beginning of the year, Hewitson had already proved to be a very successful work rider and has ridden 23 winners over that period. However, under the current rules when he starts out as an apprentice, the slate has been wiped clean as though those rides and victories didn’t exist, and he gets a 4kg allowance.

He is talented so of course trainers will jump at the opportunity of using him. However, this is not levelling the playing field, it is tilting it somewhat.  You can’t tell me that when an apprentice has had so many rides with all those winners that giving him a 4kg claim is “levelling the playing fields”. Not only is it unfair to the more experienced jockeys who are riding to win but what about the other apprentices who started around about the same time who cannot compete at that level.

It comes as no surprise that Hewitson raced to 21 winners in what must be a record time and hopefully some wise punters cashed in on the opportunity and can continue to do so throughout Hewitson’s allowance period.

However, those who make the rules need to give this a rethink for the future. I know it is rare that a work rider becomes a fully fledged jockey but it could happen again.  Before this happened I met with the Jockey Club to point out where we feel the system is wrong. Basically it is about the survival of the fittest. We start off by levelling the playing fields with a 4kg claim and then as they go through the system those cannot cut it fall out. Surely we should be looking for quality rather than quantity. Perhaps a certain percentage of their winners as work riders should be carried into their apprenticeships when calculating an allowance, should the situation arise again.

Once again this is no reflection on Hewitson. He did not make the rules and has every right play the cards he’s been dealt to his best use.

At least by the time I get back I will have a fairer chance of riding winners because he is likely to be claiming just 1.5kg by then. 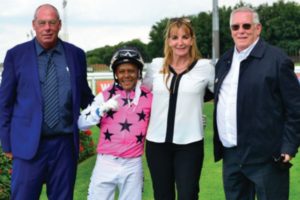 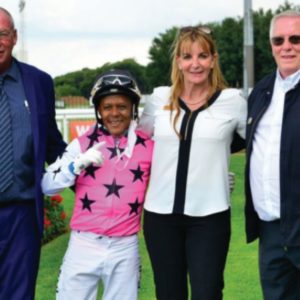