Redberry Lane to hold on

The other possible banker is well-weighted Shogun in Race 9.

The Place Accumulator might be the way to play at the night meeting at Turff ontein tomorrow. There are two promising place bankers on the programme, Redberry Lane in Race 8 and Shogun in Race 9.

Sean Tarry-trained Redberry Lane runs in a FM 84 Handicap over 1600m and comes off a good second behind top-class Nother Russia (won again next time) over 1400m here. Nother Russia swooped late that day so apprentice Lyle Hewitson and Redberry Lane did not have much time to rally, which makes it a most promising run – her fi rst a er a six-month break.

She led for much of that race and should be sharper now. Nother Russia was nowhere near her brilliant best and those who doubt the form should consider adding Smokey Aff air, Faraway Island (formerly Martha’s Vineyard), Banking April or Ossetra into their perms. Shogun, from the stable of Ormond Ferraris and to be ridden by Gavin Lerena, is consistently thereabouts and at these weights should have li le trouble fi nishing in the fi rst three in this MR 78 Handicap over 1600m.

He last won in July, when beating National Key by a neck and has not been beaten further than 4.30 lengths in his six races since. One of those races was a 1600m event at the Vaal where he was beaten a neck by Pilou with Tommy Waterdevil two lengths behind him in third and Man’s Inn another 0.75 lengths back in fourth. He is well in at the weights with both those runners and should con- fi rm the form. Shogun might not have enjoyed the yielding going last time out, when a 2.75-length fi  h behind Chepardo over 1400m.

The one for the Exactas might be Jackman, who was beaten a neck by Tommy Waterdevil over 1600m on the Inside track last time out and should turn the tables at the revised weights. Punters who put their faith in Mike de Kock will also consider Rajasthani Queen as a Place Accumulator banker in Race 6 over 1800m. She was disappointing in her fi rst outing following her debut win, when never making an impact and fi nishing ninth behind Fly North over 1200m at the Vaal last month.

A veterinary examination immediately a er the race revealed nothing immediately amiss with the Greys Inn fi lly but that run was just too bad to be true. If anything had been wrong, the stable would not be turning her out again so soon so it might pay to disregard that eff ort. Admi edly her very good fi rst win came over 1000m and she will be running much further this time. That is where the leap of faith comes in, although on breeding there is every possibility she will get the trip. 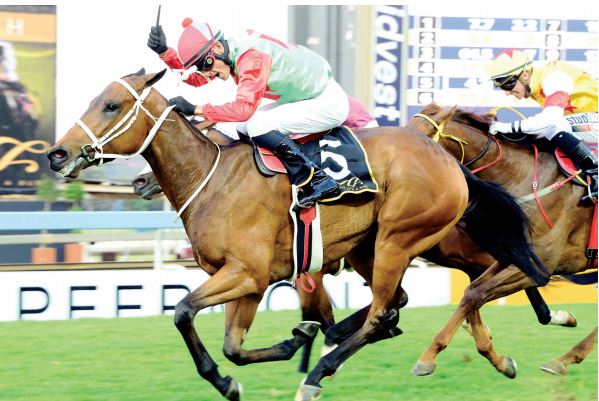