De Gouveia has An Air Of Success

Make a few dollars more with Strydom and Tarry. 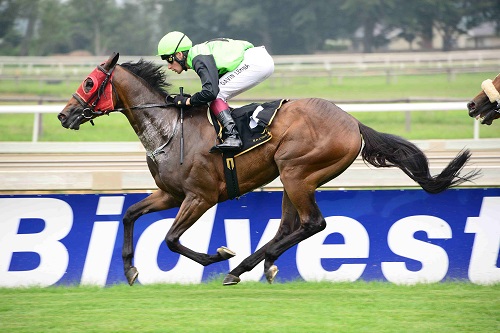 COMPETITIVE. Just Cruised in looks the runner to beat in Race 7 at the Vaal today.

Two races for apprentice jockeys will highlight the programme at the Vaal tomorrow and 1.5kg-claimer Diego de Gouveia could provide punters with an exotic bets banker in Race 4 over 1200m.

He rides An Air Of Success for Port Elizabeth-based trainer Dorrie Sham.

This Judpot filly shed her maiden certificate at the coast with a 1.25-length win over Tara’s Gold in a 1200m sprint on the Fairview turf. Although that form has not worked out terrifically well, An Air Of Success then came to the Highveld and ran an ultra-promising race over this course and distance to finish second, 2.70 lengths behind Fly North.

Her stablemate Kungfoofighting was only a long neck behind her in third place with Amoretta, Gateway To Heaven and Queen At War further back. Kungfoofighting, who will be ridden by Luke Ferraris – son of Hong Kong-based trainer David Ferraris and grandson of veteran South African trainer Ormond – is much better drawn than Air Of Success but, having her 21st career start, does not have the same scope for improvement as her stablemate having only her fifth run.

Apprentice Lyle Hewitson is currently second on the national jockeys’ table and rides like a veteran, so cannot be left out of calculations in such races. He rides Bally Swiss for in-form trainer Paul Peter. She has finished on the heels of the placed runners in her last three starts and will improve in her second run after a layoff. Box the three horses in same-race exotics.

Race 7 is another handicap restricted to apprentice riders, this one over 1700m, and 2.5kg claimer Dennis Schwarz has a strong chance of taking home the biggest cheque aboard Just Cruised In.

This Gavin van Zyl-trained gelding stayed on well late following a layoff when a 2.20-length fourth behind Sleepinseattle over 1500m on the Classic track at this racecourse last time out. That form has been franked and Just Cruised In can score his fourth career win if he does not suffer the “bounce” factor.

Double Mink rises in class following his maiden win second time out but Joe Soma’s runner must rate a strong chance for Calvin Ngcobo in a weak field.

The richest race on the card is a Novice Handicap over 1700m, Race 6. Forafewdollarsmore looks worth another chance after failing to fire in his comeback from a six-month rest, when sixth behind Alshibaa on the Vaal Classic track recently. In his only previous start he beat Ideal Secret (a winner next time) over the straight 1400m at this track in May. Sean Tarry’s runner will be ridden by Piere Strydom.

Raydaveric has not been beaten far in his last three starts, the latest after a layoff when a 1.20-length fourth behind Bold Coast over 1450m on the Vaal Classic track. He was reportedly balked and had to be steadied late in the race and should do better this time.

Orson, who ran a promising race in his post-maiden run, Kremlin Judgement, a maiden winner second time out, and So Long Spring have place chances.