The best of the three has to be Always In Charge, who will be having his first start since winning the Grade 1 Gold Medallion over 1200m at Scottsville. 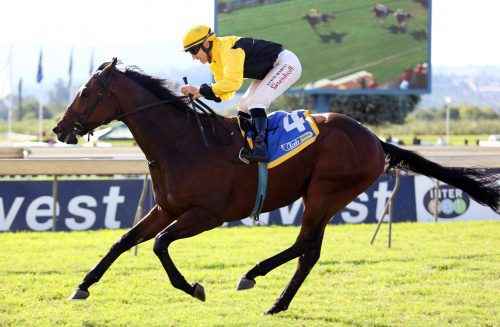 WINNING TEAM. Ferrie, jockey Anton Marcus and trainer Dennis Drier team up in Race 6 at Scottsville today and look to heading for a victory.

When Anton Marcus comes to town for a midweek meeting one must stand up and take note. That is the case at Kenilworth today. Marcus is in Cape Town for three rides and all three look to have outstanding winning chances.

The best of the three has to be Always In Charge, who will be having his first start since winning the Grade 1 Gold Medallion over 1200m at Scottsville. Although he bounded away from the opposition to beat Seattle Singer by 3.50 lengths, both Marcus and trainer Vaughan Marshall said the son of Captain Al will be better over further.

One would assume the Cape Guineas is his mission and this Graduation Plate over 1200m on Tuesday is just part of the warm-up. He is a full brother to Mike de Kock-trained Captain Lars who won the Listed Drum Star Handicap over 1800m.

Always In Charge is the best handicapped runner in Race 7 and even if this is too short he should race fresh after 150 days off the course and is expected to be too good for his opposition.

The main threat should come from Attenborough, who is very capable over this trip and has had a warm-up run.

In Race 8 Marcus rides Just Sensual from the Joey Ramsden yard. She is by Dynasty out of top mare Consensual and has run just twice. Last time she won her maiden, easily beating Empire Rising by 3.25 lengths over 1200m.

She extends the distance to 1400m and that should be in her favour. She is not all that well drawn at No 9 but looks to have loads of improvement to come.

Marcus’ first ride on the day is in the opining event where he rides Red Granite, also for Ramsden. Typically of her trainer, she had one race in April in which she finished unplaced and has now been rested for 213 days. She will have come on since then and one can expect massive improvement from the daughter of Seventh Rock.