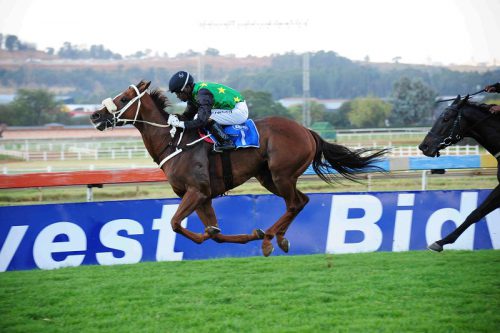 Miracle Bureau was due to race on Thursday 24 November over 1200m at the Vaal but the meeting was abandoned after heavy downpours over course.

On that occasions trainer Joe Soma was extremely confident about the chances of his runner. “He is working very well and I think one can banker him in all bets,” said Soma. He also commented that his charge had raced very well in blinkers when running in the Golden Loom Handicap over 1000m, a distance short of his best.

“I know that’s too sharp for him but I wanted to see how he would do in blinkers for the first time,” said Soma. Miracle Bureau was not run off his feet as so easily could have been the case and finished seventh, 6.20 lengths behind Bull Valley. “I thought that last run was fantastic,” said Soma.

The four-year-old son of Trippi is carded to line up for Race 7 at Turffontein tonight, a MR 91 Handicap over 1160m. He was due to run in a MR 87 at the Vaal but although he will be facing marginally stronger opposition, Miracle Bureau should still be fit enough to give a good account of himself. Chase Maujean has won on him before and has the ride again.

The two main dangers look to be Rafeef and Fieldmarshal Fenix. Rafeef hails from the Mike de Kock yard and with the exception of his debut run in which he was well beaten, the Australian-bred son of Redoute’s Choice has been remarkably consistent. In his last four starts he has one three and finished a 0.50-length second behind Amazing Strike.

Coming back after a layoff which ran from April to November, Rafeef showed lots of courage to beat Angel’s Power by 0.30 lengths.

Apprentice Callan Murray, who has ridden him in all four of his good races, is back aboard.

Fieldmarshal Fenix is from the in-form Sean Tarry yard and has raced four times for two wins and two seconds. He comes into this race carrying just 52.5kg and with S’manga Khumalo up the son of Brave Tin Soldier has to be a lively contender.

However, he is taking a massive jump in class. It is also interesting to note that whether he wins or loses, the outcome has been very close.

Pure Blonde has some excellent form but Alec Laird’s charge becomes back from a 248-day layoff and seems to need a run after a break.