Anton in town but may have to Talktothestars 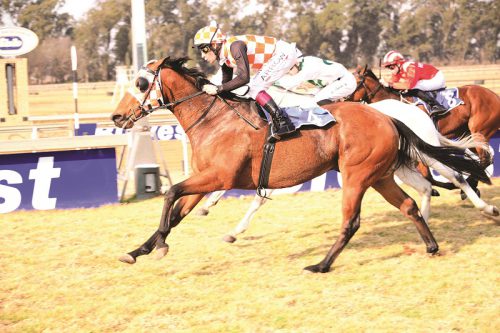 Talktothestars is handicapped to beat his rivals in Race 4 at Turffontein tonight, a Pinnacle Stakes over 1160m.

Anton Marcus makes a rare trip to Joburg for a night meeting on Tuesday and has only four rides on the eight-race card. Significantly two of those horses are owned by Mayfair Speculators, for whom Marcus rides, and it could be worth keeping an eye on the pair.

The first comes up in Race 1 where he rides first-timer Walker for the Joe Soma yard. This three-year-old colt is by Warm White Night out of Speed Queen. It’s very hard to compare him with any siblings as the dam has had four foals so far and none has run.

The combination of Marcus and Mayfair immediately has one speculating this could be a very good colt and if we are doing that, then so are the bookmakers. So he is likely to open short and it will be interesting to see whether he drifts or shortens.

Marcus also rides Graduation Day in Race 4, a Pinnacle Stakes over 1160m. This six-year-old son of Trippi has his issues but can he run!

Soma has always rated him highly and it is likely this will be a warm-up run for either the Grade 2 Senor Santa Handicap next month, the Computaform Sprint in May or perhaps both.

Although he is not well handicapped for this Pinnacle Stakes Graduation Day is probably better than his merit rating. He has only raced eight times for five wins and two places.  However, he has not raced since beating African Ruler, who he meets again, by 2.50 lengths at Turffontein on 2 July.

As the Vodacom Durban July was run the same day that was only one of two occasions when Marcus has not ridden him.

However, on a line through Carry On Alice, the horse they will all have to beat is Talktothestars. Coenie de Beer’s runner did not show in the Grade 2 Diadem Stakes at Kenilworth but seemed to find his form again when just 2.30 lengths behind Carry On Alice in the Grade 1 Betting World Cape Flying Championship over 1000m, also at Kenilworth.

He is the best weighted runner and had this been a handicap he would have had to concede at least 3.5kg to the other runners. However, he is even better handicapped as apprentice Mpumelelo Mjoka claims an additional 4kg and that could make his a hard horse to beat.

Others to consider are improving Just As I Said, African Ruler and Pivotal Pursuit.