There are two horses in the feld who look underrated. 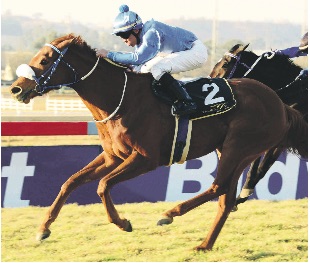 BEST-WEIGHTED. Shatoosh is the best weighted runner in Race 6 at Turffontein tomorrow, a 1450m Pinnacle Stakes, but a few horses in the race might be underrated.

Normally with stakes races horseracing players can blindly shut their eyes and rely on the abest-weighted runners in a race.

In the R130,000 topliner at Turffontein on tomorrow, a Pinnacle Stakes for fillies and mares over 1450m, five-year-old Shatoosh and four-year-old Myfunnyvalentine are theoretically weighted to finish within 0.50 lengths of each other with Smokey Affair another 0.50 lengths back in third.

That’s the theory, and both the top two have credentials.

Shatoosh, trained by the father-son partnership of Mike and Adam Azzie, followed a win over this Inside track 1600m with a good second last time out. She has run over this distance once in her life, finishing second, and finished fourth over 1400m in her third-last start. Champion trainer Sean Tarry has given a rare ride to jockey Piere Strydom which makes Myfunnyvalentine an interesting runner. She has raced only twice this year, failing to fire in a Kenilworth feature in January and then running a good second to Spring Wonder over 1160m on the Standside track last month. This distance is further than she has travelled before but there is every possibility she will stay.

However, in practice the top two could have their work cut out because Smokey Affair another horse at the bottom of the weights are hugely promising and might well be badly underrated.

Smokey Affair is a four-year-old Elusive Fort filly who ran in two top fillies’ features during the summer season in Cape Town last season, including running on from near last to finish just four lengths behind Just Sensual in the Cape Fillies Guineas early last December.

She has been seen out only once more since and that was in a 1400m FM 88 Handicap in March and was well fancied. However, she coughed and let her supporters down and faded to finish five lengths behind Hanabi in fourth.

She has been sent up to Jozi to master trainer Mike de Kock and will be making her debut for the stable in this race. She should be quite close to peak fitness and on her best efforts will be hard to beat. She looks the right one to banker – to win or oat – in Quartets, although assistant trainer Mathew de Kock said: “It is difficult to predict how she will go first time out for us, and based on her work in my opinion she will need a little further than this. She will make improvement on this run but I wouldn’t be surprised to see her right there.”

Sylvan On Fire is untried in feature company but has done little wrong in her four-start career. She opened her account with an impressive win over this course and distance in April, form that has been well franked, and ran again only last month, when beat- ing Knysna Rose over 1600m on the inside track.