Most stunning Arc display from Enable on Sunday 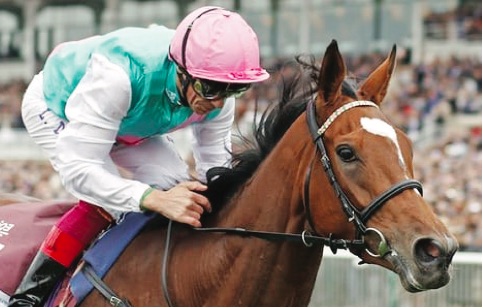 TWO GREATS. Enable became the first three-year-old British-trained filly to win the Arc and Frankie Dettori increased his reputation as a top jockey with his fifth victory in the race.

London – Even the remarkable Aidan O’Brien, now only two short of Bobby Frankel’s record of 24 Grade 1winners in a season, could not upstage the brilliant En- able in the Prix de l’Arc de Triomphe at Chantilly on Sunday.

O’Brien threw everything at Enable – his five-strong team represented 28% of the eld for Europe’s richest crown jewel and included winners of 11 races at the top table but none of them could lay a glove on the odds-on favourite, who produced one of the most stunning Arc displays I’ve seen.

I always felt that I was spoilt by my first Arc, the magnificent Mill Reef in 1971, but the subsequent roll of honour includes such superstars as Alleged, Dancing Brave, Zarkava, Sea The Stars and Treve.

However, the way Enable shot four lengths clear in a ma er of strides when Frankie Dettori popped the question at the 400m pole was both mind-blowing and exhilarating, and the Italian, celebrating a record h Arc win, rates the filly “as good as any horse I’ve ridden.”

We all treasure the “I was there” sporting memories and, having been banging the Enable drum to anybody in earshot since before she won the Oaks at Epsom in June, it truly was an emotional moment.

Sure, the 7-1 be ing voucher locked away in the study made it even more special, and in truth at no stage did Enable ever look like being beaten, but for once backing a winner was immaterial – well almost!

There is no be er jockey in the world than Frankie on the big day Ryan Moore included and his ride on Sunday was pure perfection. He was in the right place every step of the way, and the filly, who has even put on weight since the Yorkshire Oaks, has been superbly trained all summer by John Gosden, who is a master of his craft.

It was not until 28 November last year that Enable first set foot on a racecourse – the Tapeta track at Newcastle – and though she never missed a dance all season, rattling off five G1s, she saved the best until last as she sailed away from the chasing pack in imperious fashion, leaving even the French impressed.

It was Gosden’s second Arc after Golden Horn and Dettori’s record-breaking fifth, and now the pair are hoping and praying that Saudi owner-breeder Khalid Abdullah (it was also his h win in the race) gives the green light for Enable, the first three-year-old British-trained filly to emerge triumphant, to “do it all again next year”.

Gosden said:”Racehorses are not fully mature at three. Enable is still growing and she won’t have her full complement of teeth until next year, so it would be marvellous to bring her back next season.

“She’s definitely finished for this year, but how wonderful it would be to try for back-to-back Arc victories, especially with the race returning to Longchamp, and what be er stage for her grand finale than the Breeders Cup in Kentucky.

“There is no modern day jockey be er than Frankie on the big stage. He is a tactical genius looking back we had Piggo , Sain Martin, Shoemaker and McCarron, but Mr Dettori has an amazing talent and is as good as any I’ve seen.”

Frankie, who will be 47 in December, reckons he has “perhaps another five years in the saddle”, and my one regret is that racing is a minority sport in Britain and small fry compared to football.

So when the youngsters wake up to the fact that it can be terriffic fun and provide you with such a great buzz then maybe it will be too late. The charismatic Sardinian will have retired.

If not quite providing the thrills of Chantilly, then Newmarket last week boasted top-class action, so it was disappointing, if not surprising, that the total attendance over the three days was just 23,018, fewer than four of the soccer matches in the Champion- ship on Saturday.

It’s a problem that is not just British. Only 5,000 went through the turnstiles for day two of Irish Champions weekend at The Curragh, which even allowing for the track’s discomfort during major rebuilding, is disgraceful, while most of the French are once-a-year merchants and I barely heard a Gallic voice at Chantilly, such was the domination of Brits and Irish.

O’Brien could do no better than fourth (Order Of St George) in the Arc, but he mopped up four of the prestigious two-year-old races at Newmarket and Chantilly.

Clemmie is his best juvenile filly and is an even shorter-priced favourite (3-1) for next year’s 1000 Guineas a er winning the Cheveley Park in fast time, but 24 hours later stablemate Happily, as if say- ing “anything you can do I can do be er”, silenced the colts in the Prix Jean Luc Lagardere and is only two points longer for Newmarket next May.

The Middle Park did not look anything like as strong as those two races, but O’Brien, who is considering taking both Clemmie and Happily to California for the Breeders’; Cup, might also send Newmarket winner US Navy Flag, who proved just too strong for stablemate Fleet Review.

O’Brien rarely misses a Breeders’ Cup, and two other Ballydoyle inmates likely to be heading across the Atlantic next month are Rhododendron and Hydragea, who fought out the finish of the Prix de l’Opera and may renew rivalry in the Filly & Mare Turf.

Besides Enable rubbing French noses into the soggy turf, the Brits also won the Marcel Boussac with Wild Illusion, the l’Abbaye with the flying Battaash and the Foret with Aclaim.

For a punter following trainers often proves pro table, and I like Gosden’s PERSUASIVE in the Group 1 Sun Chariot Stakes at Newmarket on Saturday. He could also strike with WAADY in Ascot’s Rous Stakes, while another rm in great form are Godolphin, whose BLUE POINT looks the one to be with for the Bengough Stakes.