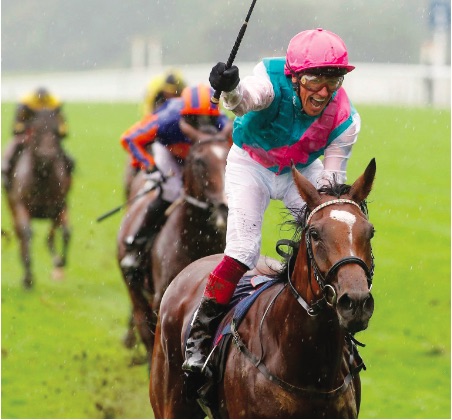 NOT OVER YET. The decision has been taken not to retire star filly Enable who will be in action for another year.

Fantastic news filtered through on Monday that Enable, Europe’s champion racehorse for 2017, was going to stay in training as a four-year-old.

And inevitably it has increased anticipation that we might next year get our wish and see the head-on clash of the world’s two most talented fillies, with the Arc winner taking on the Aussie superstar Winx.

Realistically, it is still more a possibility than a probability as Winx, who stretched her remarkable winning sequence to 21 on her first appearance of the Melbourne scene last Saturday, is unlikely to dip her toes into waters deeper than 2000m again.

In contrast, Enable’s five Group 1 victories have all been gained at 2400m, and the only time she was beaten was by stablemate Shutter Speed over the 2000m at Newbury in April, albeit on her seasonal debut.

Granted, Winx won the first of her 14 Group 1s over the longer distance at Doomben two years ago, but since then she has strutted her stuff on racing’s elite catwalk between 1600-2000m, with Chris Waller taking the view that “at the highest level 2000m is far enough.”

Winx, who never came out of first gear to make a winning debut at Flemington, proving that she can be effective maybe even more so in the state of Victoria as she is in her home town of Sydney, has some unfinished business to tidy up before Waller and his team decide on whether to spread their wings to the Northern Hemisphere.

The immediate priority is to try and emulate the legendary Kingston Town by winning a third Cox Plate at Moonee Valley on 28 October.

However, Waller has expressed a strong interest in bringing the Southern Hemisphere’s best since Black Caviar to the UK next summer, and Frankie Dettori and the Enable are equally excited about the prospect, declaring “bring it on”.

Waller rated Winx “be er than ever” after she received the ‘key of the door’ in making it 21 o the spin in Melbourne, and he conceded a three-race plan of Royal Ascot, Sandown and York next summer “is still on the table”.

He added: ”Winx never left an oat after the Turnbull, and she continues to thrive physically.

“She weighed 495kg when she won her rst Cox Plate.

“And though she has climbed to 535kg during her latest spree, she will be 515kg when we put her on the scales before Moonee Valley.”

Winx has the option of the Queen Anne (1600m) at Royal Ascot, but the Prince of Wales Stakes, Eclipse and Juddmonte International would be the logical meeting points for the big two should the dream ever become reality.

And it would not be inconceivable that Enable could drop back to 2000m – it would be hard to say she would not have won the Arc over that trip, and the filly’s trainer, John Gosden, successfully made the switch down in distance with Enable’s sire, Nathaniel, in the Eclipse.

However, Winx is not the only one chasing records.

Five of those Ballydoyle celebrations at the top table have come in the last fortnight, the latest with the resilient Roly Poly in last Saturday’s Sun Chariot Stakes at Newmarket.

Roly Poly, who had already contributed a couple, courtesy of the Falmouth, also at Newmarket, and the Prix Rothschild at Deauville, looked as if a busy season might be starting to take its toll when she disappointed in last month’s Matron Stakes at Leopardstown last month.

But Roly Poly was bang on her A-game here in beating Persuasive, and in doing so sealed her place on the Coolmore fiight to California for the Breeders Cup.

Newmarket stage a cracking two-day meeting this week-end, with the Group 1 Dewhurst Stakes on Saturday the highlight.

Undoubtedly the most prestigious of all our two-year-old races, the Dewhurst sees the return of Expert Eye, who is antepost favourite for next year’s 2000 Guineas.

He was the most impressive winner at Glorious Goodwood in August when pulverising his Vintage Stakes rivals.

Sir Michael Stoute, Expert Eye’s trainer, has only won this prize once, and that was 31 years ago with Ajdal, but, despite a hiccup last month which prevented the colt heading off to Ireland for the National Stakes, has done nothing but please his handler.

Expert Eye is odds-on favourite, with Jim Bolger, five times a Dewhurst hero, boasting the second-best in the market in Verbal Dexterity, who won that National Stakes.

Champagne Stakes winner Seahenge could be the best of Aidan O’Brien’s team, but the value might be John Gosden’s EMARAATY, a £2.6-million purchase who built on his promising Sandown debut when winning emphatically at Newbury.

Granted, it’s a big jump up from a maiden, but Emaraaty looks all class and his final gallop at home suggested he’ll push Expert Eye all the way.

The drying ground is a big plus for the athletic Emaraaty.

But it will also prove a bonus to the chance of O’Brien’s SEPTEMBER in the Group 1 Fillies Mile there 24 hours earlier.

September has been beaten twice in testing conditions since looking a potential star at Royal Ascot, but on this be er surface can show she is not far behind Coolmore’s best.

The major be ing race of the weeend is Saturday’s 34-runner Cesarewitch Handicap over 3600m. John Constable, formerly trained by O’Brien, has been the big market mover, but I like the chance of WHO DARES WINS.

His trainer, Alan King, best known for his jumpers, captured this prize with Grumeti two years ago, and even with a 2kg penalty his chance is obvious.

Other Friday fancies at HQ are SOUND AND SILENCE in the Cornwallis Stakes, MADELINE in the Oh So Sharp, DUTCH CONNECTION in the Challenge and HUMBLE HERO in the Old Rowley Cup.