Roaring Lion to seek revenge in the Coral-Eclipse Stakes

O’Brien still to show his hand for the race. 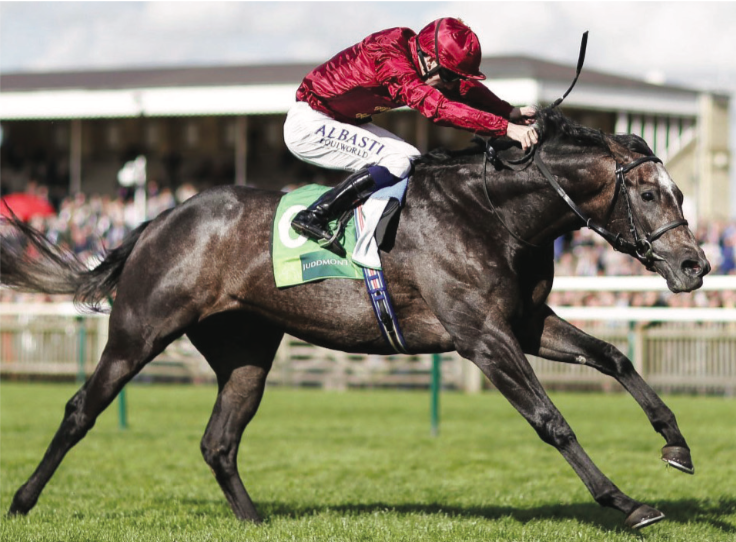 ONCE MORE. Roaring Lion and Masar meet for the fourth time this season and Roaring Lion’s connections hope he can score this time in the Coral-Eclipse Stakes.

London – Just how good are this season’s crop of three-year-old colts in Europe not too special judged by the outcome of Saturday’s Irish Derby at The Curragh.

And with Cracksman and Enable, the king and queen of last year’s classic stars, on the sidelines for different reasons and last month’s Prince Of Wales’s Stakes hero Poet’s Word being aimed instead at the King George VI and Queen Elizabeth Stakes at Ascot on 28 July, we won’t learn much more about the respective merits of the two generations from this weekend’s £790,625 Group 1 Coral-Eclipse Stakes at Sandown.

The Eclipse comes at the perfect time for the three-year-olds, who receive a weight allowance of 5kg from the older brigade, and last year only a whisker prevented Barney Roy from giving the youngsters a third consecutive win in this prestigious race.

Godolphin’s Hawkbill, successful two years ago, is arguably the best of the older horses, but his quirks are popping up more often these days, and he was well beaten at the Royal meeting, though he did finish in front of Cliffs Of Moher, who might yet be included in the Coolmore challenge for Sandown.

So it seems safe to focus on the three-year-olds, with Derby hero Masar and Epsom third home ROARING LION meeting for the fourth time this season.

Masar, who left two galloping companions eight lengths adrift in a dawn gallop at Newmarket last Saturday, has been Eclipse favourite since Godolphin opted to head for the Esher slopes rather than seek the classic double in Ireland.

But, while the formbook is the punter’s best friend, if it was that reliable we’d still have Germany, Spain, Argentina and Portugal in football’s World Cup.

And though the score stands 3-0 to Masar, revenge is a dish best served cold and this could be the day when the Lion gate crashes the top table.

Masar’s advantage over his arch-rival was a resounding nine lengths in the Craven Stakes at Newmarket in April, but the difference was less than a length in the 2000 Guineas, where Roaring Lion had no company up the stands side.

Granted, Masar was the clear master at Epsom, finishing two lengths ahead of Roaring Lion, but, while the latter did not look as uncomfortable on the undulations as stablemate Cracksman had done 12 months earlier, John Gosden’s long striding colt produced his best performance at York in the Dante, and the Surrey Downs were never going to play to his strengths.

Gosden is not claiming that Roaring Lion is as good as Golden Horn, who won him both the Derby and Eclipse in 2015, but the Newmarket trainer is adamant that he is superior to Benny The Dip, his first Blue Riband hero, who split two superstars in Pilsudski and Bosra Sham in this race in 1997.

When Roaring Lion won his trial so emphatically over this trip on the Knavesmire, the colt’s Qatari owners naturally wanted to go for the Derby, but Gosden always felt that he would be stretched by the extra distance at Epsom and so it proved.

With a small field, this could well be a tactical affair, but Roaring Lion is a much more straight forward individual than Masar, and back over what is his optimum trip and in a race in which the free-running Derby winner might well find that he has to do the donkeywork out in front, Roaring Lion can sit in the box seat and pounce whenever Oisin Murphy wishes.

Furthermore, the turf gallops at Newmarket have either been too soft or too firm for much of the last two months, so Roaring Lion’s afternoon out on the Rowley Mile last Saturday he, too, worked brilliantly with two stablemates – was his first opportunity to exercise on grass this year.

Like Godolphin, Aidan O’Brien also has five Eclipse trophies on his Ballydoyle mantelpiece, but as yet he has not played his hand for Saturday, with, besides Cliffs Of Moher, Saxon Warrior and Happily also being considered for the race.

Our 2000 Guineas winner Saxon Warrior has subsequently had his limitations exposed in both the English and Irish Derby and, despite the Coolmore hype that preceded Newmarket, he is clearly a good horse but no more than that. Neither at Epsom nor The Curragh did stamina look the reason for Saxon Warrior’s fall from grace, and those two performances left one wondering how he ever had the pace to beat the best over 1600m in the Guineas as he seems to have lost his fifth gear.

Indeed, Happily could prove the best of the Coolmore team. This filly has been ultra consistent in the fast lane and was placed in both the English and Irish 1000 Guineas and then improved for going up in trip when finishing fourth in a blanket finish to the Prix de Diane at Chantilly. The stiff uphill climb at Sandown should suit her.

The ex-French trained DIFFERENT LEAGUE, now with Aidan O’Brien, ran well at Royal Ascot and dropped in grade could be worth an interest in the Coral Charge on the supporting card, while I also like the chances of DAIRA PRINCE in the competitive Coral Challenge.

The first trainer punters look for when trying to solve the puzzle of the Lancashire Oaks is John Gosden, who has won this Group 3 race seven times, and he might again have the answer to Saturday’s Haydock feature in the improving PRECIOUS RAMOTSWE.

Finally, Britain have always been put in the shade by the Irish when it comes to the Melbourne Cup, but in last week’s start-to- finish Northumberland Plate winner Withhold, now 16-1 favourite, we have a horse who has the perfect blend of speed and stamina for “the race that stops a nation“ Down Under on the first Tuesday in November.

Withhold won off a mark of 99 at Newcastle so even allowing for a weight-rise would now need to win or run well in a Group race to ensure a place in the Cup field, but Roger Charlton has pencilled in next month’s Geoffrey Freer at Newbury or Lonsdale at York to earn qualification.

In contrast, while both Ascot Gold Cup winner Stradivarius and Irish Derby hero Latrobe are both Flemington possibles, the Australian handicapper will need to come up with an uncharacteristic slice of generosity when allocating their weights to tempt connections to make the trip. Now where did that flying pig go?