This year’s Dingaans has seen a strong entry from both Mike de Kock and Sean Tarry and it comes as no surprise that runners from those two yards dominate the being. 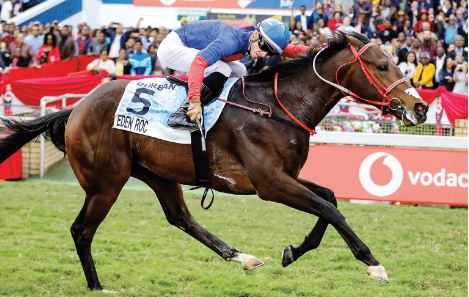 FANCIED. Eden Roc is one of six runners nominated by Sean Tarry to contest the Dingaans over 1600m at Turf- fontein on Saturday 30 November and has been priced up second favourite at 6-1. Picture: JC Photographics

Although only a Grade 2 race, the R500,000 Dingaans has always been a strong race for three-year-olds and has been won by many horses who turn out to be champions.

It also one of the three Grade 2 races to be run at Turffontein on Saturday 30 November, as part of the undercard for the R2-million Gauteng Chris Gerber Summer Cup, proudly brought to you by Bidvest.

This year’s Dingaans has seen a strong entry from both Mike de Kock and Sean Tarry and it comes as no surprise that runners from those two yards dominate the being.

The only concern is that the Grade 1 Cape Guineas is just three weeks away and it is questionable whether horses will run in both races. De Kock has entered Frosted Gold, who won the Grade 3 Graham Beck Stakes over 1400m in his first run back from a rest in which he was gelded.

He has also nominated unbeaten Marshall and Oscar Wilde, as well as Hellofaride. Tarry has entered Grade 1 winner Eden Roc and Putonthered- light, as well as Tree Tumbo, Shango, Pure State, On My Mind and Rock the Globe.

One runner who is not there is Equus Champion Two-Year-Old Got The Green Light from the Joe Soma yard, but interestingly, he has been nominated for the Merchants over 1160m, where he could come up against the likes of Prince Of Kahal, William The Silent, Sir Frenchie and a lightly weighted Singforafa.

Queen Supreme has been priced up 7-2 favourite for the Ipi Tombe Stakes over 1600m but she could still run in the Summer Cup instead.

This is also a great race with likes of Vistula, Mill Queen, Gin Fizz, Spirito hegroove, Running Brave and Tallinn among the entries. Supplementary entries close today at 9am and final declaration close at 11 am on Wednesday.