A first jockey’s title for Warren Kennedy looks inevitable, and the champion-in-waiting has a couple of excellent winning chances on the Hollwoodbets Greyville polytrack come Wednesday. 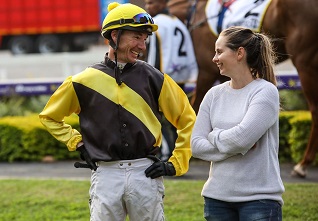 Appropriately his best ride is a family affair – Rachel in Race 6 for the training partnership of his wife Barbara Kennedy and brother in law Wayne Badenhorst.

The daughter of Philanthropist has recorded two good places over the trip since relocating from Gauteng, and lines up in a moderate FM69 affair over 1200m.

She could be counted something of an unlucky loser last time as she arguably cost herself victory by hanging in when going down narrowly to Spring Burst.

A second career win is now overdue, and from a decent draw she is worth a fair wager.

Most of these are well tried battlers, and recent easy Maiden winners Matadora’s Parade and Brunilda could be the ones to provide some cheek.

Kennedy’s other standout ride is in Race 4, where he partners Railtrip over 1800m in a Graduation Plate for long term supporter Gavin van Zyl.

A Grade 1 runner up as a Juvenile, the Trippi filly has never fulfilled her early potential. But she comes into this in fine nick, and is well-weighted with the benefit of her fillies allowance.

She should go mighty close, but has let down the side a few times in the past, so a little caution is advised.

Useful three-year-old Special Blend appears the primary danger, and going swingers and exactas with this one should produce profits.

A good each-way chance is High Voltage in Race 5, also over 1200m. The speedy Querari gelding has done little wrong on this surface, and found 1500m too far last time on turf in strong company.

Sprinting may well be his forte, and with 4kg claimer Thabiso Gumede up he is likely to prove tough to peg back shouldering a handy galloping weight.