Let the Wild One loose

The sun is predicted to radiate all over Greyville and the R1.25-million eLAN Property Group Gold Cup over 3200m will finally take place, a week after its scheduled date. 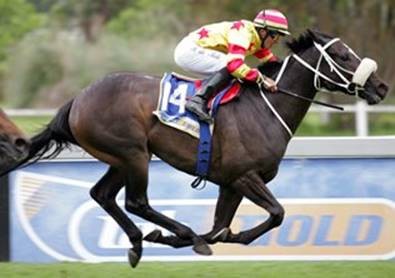 There are no major changes as a result of the delay and as trainer Mike de Kock points out, everybody is in the same boat.

“I’m not worried about horses ‘going over the top’, it’s all about keeping them healthy for the week. They are all very fit, popping out of their skins, and that’s when accidents happen.”

“He’s not the soundest of horses. I was always patching him up and sending him out, so I decided to give him a solid rest and it certainly has made a big difference.

“I think he has had a fantastic prep. He’s a lot better with the rest than he was last year without it. I specifically stayed away from the feature races on July Day because I wasn’t looking for a penalty and I think he’s had two great races since he’s come back.”

The five-year-old son of Mogok, who will officially turn six on Gold Cup Day carried 53.5kg last year when finishing a 0.50-length second behind Wavin’ Flag and this year has just 1.5kg more on his back. Last year he jumped from the widest barrier position and while the draw counts for less over this sort of distance, he will be in barrier No 5 this time, which looks sure to benefit jockey Anthony Delpech.

Trainer Dean Kannemeyer will be hoping to pull off the Durban July-Gold Cup double with a three-pronged attack, headed up by improving Solid Speed. He also saddles Hot Ticket and Balance Sheet.

Solid Speed is another son of Dynasty and he has flourished since arriving in KwaZulu-Natal.

He won three successive races at Greyville, including the Grade 3 Lonsdale Stirrup Cup over 2400m before running a 0.75-length third behind Heart Of A Lion in the Grade 2 Gold Vase over 3000m on Durban July Day.

Wild Ash finished a short head in front of him but is now 3kg worse off and looks unlikely to frank that form.

“He has a handy galloping weight of 53kg, he is well drawn and he is an improving four-year-old. I’m also not worried about the extra 200m this time. He wasn’t stopping in the Gold Vase,” said Kannemeyer.

Hot Ticket was champion stayer last year but has not won since last year’s Gold Vase. He does carry 1kg less and must be respected but he has a tough ask winning with 59kg on his back.

De Kock also saddles Kingston Mines who might find 3200m a touch too far at this stage of his career while the Joey Ramsden pair of Disco Al and Coltrane must also have winning prospects.