The race was a triumph for trainer Geoff Woodruff, who was winning the race for the third year running. He’d saddled four of the first five past the post in 2013, when the race was won by Yorker, and then first and second last year with Louis The King and Killua Castle. The multiple champion trainer would have had very mixed emotions when meeting his horses in the first and second boxes, though, because his third runner in the race, The Captain’s Tune, was pulled out at the top of the straight after leading.

French Navy started favourite at 6-1 with Master Sabina (from 9-1) and St Tropez slightly longer at 13-2 and only a point shorter than Mac De Lago at 15-2. Power King was the only other runner quoted in single figures at 9-1. Deo Juvente drifted from an opening call of 9s to 15-1.

Master Sabina and Deo Juvente were midfield behind The Captain’s Tune, Diesel Jet, ML Jet, Platinum Jet, Dynamic and Ultimate Dollar but when the runners turned for home, neither Gavin Lerena nor Cormack wasted any time getting their mounts into top gear. They drew away from their rivals halfway down the straight, with Deo Juvente shifting in slightly and Master Sabina shifting out. The horses made contact about 400m from the line and then 100m from home, Lerena seemed to lean on Cormack.

Master Sabina got his nose down as they flashed past the post and beat his stablemate by a long head. French Navy, who ran a great race in defeat with top weight, flew home from his normal stalking position and finished third, another 0.40 lengths back, 0.50 lengths in front of a much improved Judicial. 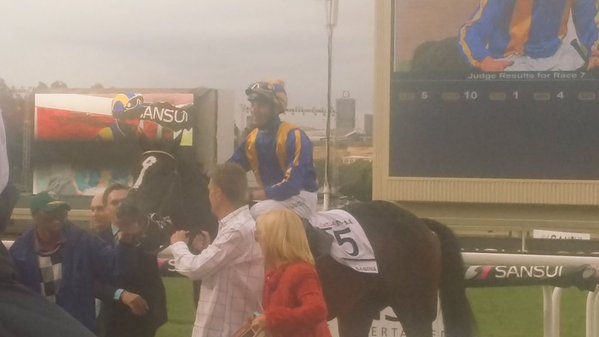 The favourite’s trainer Sean Tarry said afterwards that “you can give start and you can give weight, but you can’t give both start and weight”.

A pedestrian pace nearly scuppered favourite Noah From Goa in the R500,000 Investec Dingaans but jockey Anthony Delpech was at his brilliant best in getting his mount home to justify 5-2 favouritism home by a head from 4-1 chance New Predator, who led from the start and nearly pulled it off.

Jockey Weichong Marwing, who rode New Predator in the Dingaans, had used the identical tactics on Negroamaro in the R275,000 Joshua Doore/Russels Fillies Mile 35 min earlier and the tactics paid off. Negroamaro went well clear in the straight and kept going gamely to beat Heaps Of Fun by 4.25 lengths.

There was drama at the start of the R450,000 Amtote Merchants over 1160m when Doing It For Dan refused to load and was scratched. Favourite Brutal Force was prominent throughout and kept going gamely to beat Dollar Dazzler by 0.40 lengths, with former Computaform Sprint winner Copper Parade running a great race in third.

Smart Call and Bichette looked the two best runners in the Bradlows/Morkels Ipip Tombe Challenge over 1600m and started 12-10 and 18-10 respectively. Jockey S’manga Khumalo tried to steal the race by taking Bichette to the front from the start but Marwing got to work on Smart Call in the final 400m and the Alec Laird-trained filly edged up to her chief rival. They went neck and neck for the line but Marwing extracted just that little bit more from his mount and Smart Call won by 0.75 lengths. London ran on from the back for third.

Trainer Mike de Kock said earlier in the day that he feared Perfumed Lady was an out-and-out 1000m specialist and he was proved right in the 1160m HiFi Corp Magnolia Handicap as his 17-10 favourite could only manage seventh, fading late. Honours went to Kwinta, who disputed the lead throughout and held on by a head from Silver Class.