Apprentices to the fore

The past couple of years have provided us with an influx of young talent. 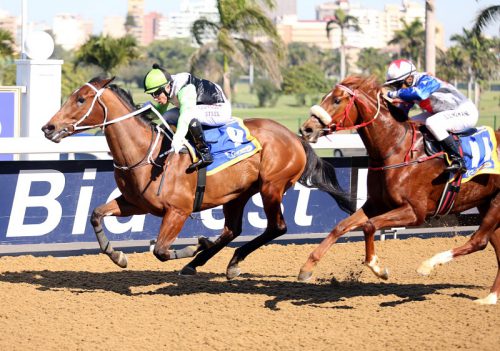 For a long time KZN racing has relied on the shoulders of older, well-seasoned jockeys to carry it.

The past couple of years have however provided us with an influx of young talent; riders on the up with the potential of becoming future champions.

Such is the case in Race 6 on the Greyville Polytrack on Friday in a FM 68 Apprentice Handicap over 1400m. The youngsters are teamed up with mounts who are all in it with a chance – which makes for an exciting race.

Diego De Gouveia displayed a level of skill which could easily be attributed to a veteran jockey, when winning aboard Bling Swing recently.

He rides Maggie Muggins, a four-year-old daughter of Dynasty who could be the best pick. She has four runs to her name and has only finished out of the top three positions once.

Her last run when finishing third behind Roy’s Rakara is best ignored. It was much needed, coming after a two-month rest and she’ll be at her peak now. Much is in this Alistair Gordon-trained filly’s favour.

She jumps from draw No. 3 and shoulders a modest 58.5kg, with the rider claiming 2.5kg which could give the duo an advantage.

Her biggest dangers should come from Stockade, Icy Spirit, and African Sunbird. Glen Kotzen-trained Stockade is long overdue a win.

This four-year-old has been rather expensive to follow. She’s seen the back end of fellow rivals over her last four runs.

She’s more than capable of revisiting that moment of brilliance she produced when defeating La Vida Banco by 0.10 lengths in August.

Denis Schwarz rides Icy Spirit who won a cracker last time under Anthony Delpech. Icy Spirit tends to be unreliable – should she be game ready, could make for stiff competition. African Sunbird was heavily backed on debut when winning by 1.25 lengths. She went on to disappoint in her second run when stepping up in class against stronger company, finishing eighth behind Miss Minver.