Trainer Brett gets high on horses

Crawford was brought up with a love of horses. 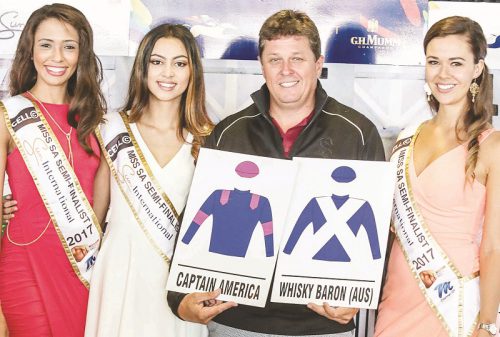 Trainer Brett Crawford admits it is the highs of racing that keep him in the game.

“Training is very tough,” he says. “The lows are really low, but the highs are exceptional and that’s what carries you through everything else.”

Crawford was brought up with a love of horses. He was born in Harare and always had horses in his life. After leaving school, he worked as a stable employee for trainers like Brian Muscutt, Neil Bruss and Shane Rankin in Zimbabwe.

“Shortly after that, I left for Johannesburg and worked for Mike de Kock. I was with him for about eight months and then moved to Cape Town.”

Once there he joined Eric Sands and a few years later, Crawford travelled to Durban, where he was in the employ of Dennis Drier.

“I learned a lot from all three as they were very different types of trainers. Mike had only recently taken over the yard of Ricky Howard-Ginsberg, who had passed away suddenly. He had a very modern approach to training and was always researching ways to improve feeding or training methods.

“Dennis was brought up by Syd Laird and has a more old-school way of doing things. Eric is a great horseman and the advantages of working for people like that gave me exposure early on to good horses. Eric trained Flobayou, who was the best sprinter in the country at the time.

“Like anything in life, those successes are the things that define trainers. They know when you need to ease off and when to put the horses under pressure. It’s the ability to take the one- and two-time winners and turn them into champions.”

In 2001, he became private trainer to Sabine Plattner and success came very quickly. “We got together at the end of July and I had my first runners for her in September. Angus finished third in the 2002 Met and then ran second in the Durban July.”

Piere Strydom rode Angus into second spot behind De Kock-trained Ipi Tombe and then gave his commitment to Crawford he would ride the horse in the 2003 Met.

“I think after he won the Summer Cup on Eventuail he had second thoughts. But he committed to the ride and kept to his word.”

It turned out to be a good move as Angus won the 2003 Met and gave Crawford his first victory in that race. He trained for Plattner for eight years and in 2009 went out on his own.

“I will always be very grateful to the Plattners. They grew me more than any other individual I had worked with. I got to travel all over the world and that helps broaden one’s mind.”

He won seven Grade 1 races while in her employ and trained some very good horses.

“My favourite is still Laisserfaire. She won three Grade 1s and two Grade 2s. She beat the boys and won races in three provinces. I still rate her as the best I have trained.”

His next champion was Jackson, who also won three Grade 1 races, and one son of Dynasty was followed by another when Futura joined the yard. As a three-year-old, Futura finished third in the Durban July, then won the Grade 1 Champions Cup at Greyville. He went on to complete the L’Ormarins Queen’s Plate and Met double.

Shortly after claiming his second Met win, Crawford experienced a low point when a dispute among the owners resulted in Futura being moved to Justin Snaith. “Futura was a very good horse who did very little wrong,” said Crawford.

“The pressure is to get the horses to the track fit and sound. We’ve qualified them for the races. We understand where we are in the merit ratings, and we’re not living in a fantasy world.

“Whisky Baron has improved since he was gelded and has done nothing wrong. His merit rating is now at 110 from 96. He reminds me a lot of Angus and has taken a similar route to the Met. He has progressed with each run.

“Captain America ran third last year and is now 2.5kg better off with Legal Eagle. You never get a bad run from him and although six years old, he is still on top of his game. I expect another honest run.”

Crawford, 45, can take heart in his success as a trainer. “I have no preference for a horse who runs a specific distance. I have trained Grade 1 winners from 1 000m to 3 200m. I just love to train good horses.

“After all, it’s those good horses who get me up every morning.”