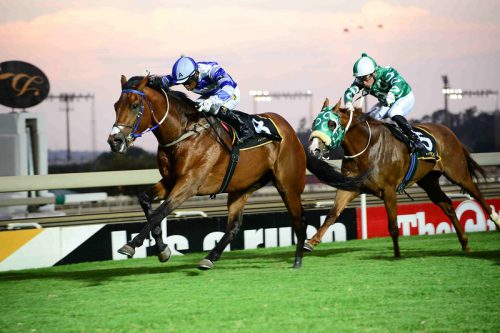 Horseracing can be a very dangerous game – especially for jockeys. In the last year or so, especially in Australia and New Zealand, there have been some serious accidents and some lady jockeys have died as a result.

There are numerous reasons why we have injuries. I have ridden some horses who don’t feel so good going to the start and have run accordingly. But there are also times when the horse goes down 100% and something can go wrong during the race. That could happen to any athlete, but when you are travelling at full galloping speed with a whole lot of animals weighing some 500kg all around you, accidents can prove fatal.

The biggest problem from an Australian point of view is that the tracks are smaller in circumferences so they have short straights, and the fact there are no false rails leaves little margin for error.

If something happens while you’re racing around the turn you are much more bunched and there is very little you can do to correct the problem. However, once in the straight you can start to fan out and you will have a bit more space to move.

Horses have different traits and there are some who like to bolt. It’s like putting your foot on the accelerator of a car and finding out the brakes don’t work.

It could just be coincidence that lately more women have been the victims but I’m not sure whether it is a matter of strength or not. In general men tend to be stronger and even we sometimes have no control over an animal 10 times our own weight.

With the turning tracks Down Under jockeys tend to move up on the turn and with no false rail to fan out the horses in the straight, accidents are more prone to happen.

I’m not blaming careless riding for the incidents. There are times, for example, when you’re in your car, driving safely and some other person takes you out. It is the same with race riding where you often are relying on one another to keep you all safe.

Most of our tracks are not that tight and the longer straights and false rails do make for safer racing.

We are starting to get into the swing of the Gauteng autumn season with a couple of features this afternoon. Some of these runners will be looking to do bigger things in the months ahead.

Race 1 is a Maiden Plate and the two runners with the best form are Roman Evening and The Hunting Game. Going on Roman Evening’s action I’m not sure if he will enjoy the inside track while The Hunting Game has only had one run but jumps from No 1 draw, an advantage on the Turffontein Inside track. Also show respect for the unraced horse, Real Flight, as the raced runners do not have the strongest form.

Race 2 is another Maiden Plate over 1000m and here I have my best ride in Gratuity. She has a lot of speed so this track should suit her, especially from a good draw. Unfortunately Moss Gas, who finished 0.75 lengths behind Gratuity last time, ran unplaced in a work riders’ race on Thursday.

For that reason consider Osculation as back up in the BiPot.

Race 3 is a fillies’ handicap which are often difficult but this should be between Girl On The Run and Inaninstant, who has the benefit of a 4kg claimer. She can be inconsistent but on best form could beat this field. They should be good enough for the Place Accumulator in a small field.

Race 4 is a Maiden Plate where no horse stands out in a moderate field. Therefore include as many as you can in the Pick 6. For the PA choose between Handsome Henry, Flipflash and Bay Style.

Race 5 has possibly the best bet on the card in Furiosa. His last two starts were against quality opposition and the fact he is a young horse who is improving, should make him a reasonable bet. For me he is a banker in both the PA and Pick 6.

Race 6 is the Listed Wolf Power 1600. It is a handicap and a tricky affair with lots of horses having chances. Rafeef is my first choice as he has the most room for improvement, especially as he has won four of his last five starts. His dangers are Irish Pride and Champagne Haze.

They should be good enough for the PA but for the Pick 6 include Bulleting Home, Arctica and perhaps my ride, Romany Prince, even though he is held on some runs. Hopefully with his latest form, a good draw and improvement, he could turn that form around.

For the record Gavin Lerena did have the choice of rides and went for Irish Pride.

Race 7 is the Grade 3 Tony Ruffel Stakes and we have some up-and-coming three-year-olds looking to make a name for themselves.

My main selections are the Mike de Kock-trained pair of Ektifaa, won the Grade 2 Choice Carriers Championship in Cape Town, and Al Fahad, who has run behind some quality opposition. Don’t forget this is a conditions race so the highest merit rated horses are at an advantage and these two fall into that category. They should be good enough for the PA.

For the Pick 6 consider Doosra, who I believe ran below his form last time, my ride, Chili Con Carne, Matador Man and possibly Maximizer, who has competed in weaker company but is on the upgrade.

The Grade 3 Three Troikas Stakes is for three-year-old fillies and as this is another plated race the best handicapped horse is at an advantage. So if Maleficent runs to her best form she has to be the bet of the day. Unfortunately she has not raced for two months since her trip to Cape Town and a bad draw is also not in her favour.

With the PA you could take a chance and banker her but with the issues you could back her up with Anna Pavlova and Al Hawraa.

Other possibilities could be Last Chirp who is drawn No 1, Zaakhira, possibly Elusive Strike who is an improver, and the dark horse in the race, Visuality. She has beaten Maleficent and since then she’s had some bad draws, has not had the run of the race and has raced against better.

I ride Babbling Brooke who’s got some decent form but this race could be too short for her and this could be a prep run for bigger things. However, I am looking for a positive showing from her.

Race 9 is a handicap with two horses standing out. Parisienne Chic beat My Friend Lee last time out who subsequently came to win. She is well drawn and will be suited to this track.

The danger could be Russian Star but she has a bad draw to overcome. They should be good enough for the PA. If you look past those two for the Pick 6 then just about the field would apply, other than Iridium Silver and Global Spin.

I ride End Game who is held on form and a bad draw won’t help my chances either. On the positive side she still has scope for improvement.