Big Pick 6 safer with no banker

With a R500,000 carryover, authorities are estimating that the Pick 6 pool at Turffontein today will reach R2.2 million, so I’m going focus up on helping my readers win their share of the spoils. 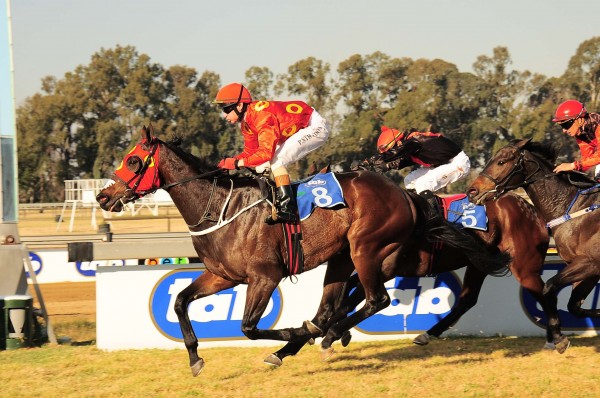 GET OUT STAKES. Snappy Lad, pictured winning at the Vaal in May, looks good value at 4-1 in the final race at Turffontein today.

There are no easy races and, to my mind, nothing stands out as a banker. Thank heavens couplings still apply, which will help our cause enormously in a couple of the races.

In Race 4 a moderate bunch of maidens face the starter, so even though Regal Rose is drawn badly at No 12, she should be good enough to win in this company. Banker her in the Place Accumulator (PA). Her only danger could be Running Sensation and she must be included in Pick 6 permutations. Also consider including the four-horse Leon Erasmus coupling of Classy Looker, Constant Melody, River Princess and Toreador’s Star, who will wear blinkers for the first time.

I’m riding Moikavano in Race 5. Her form hasn’t been that good of late, so I’m not sure what to expect. I’m leaning towards Cherry On The Cake as the winner. She’s been given a hefty 64kg but will be relieved of 4kg, courtesy of Collen Storey’s claim, and could be good enough to beat this field. She should stand as another PA banker. For Pick 6 purposes, my addition would be the St John Gray coupling of Dance Alley and Come With Me.

In Race 6 I’m riding Rocky Stallone, who warrants inclusion in Pick 6s. He’s drawn at No 1, which is a huge, asset, but is quite badly treated by the weights on collateral formlines. So play wide in the Pick 6 and also include Henry Higgins, Great White and Egyptian (the three for the PA) as well as improving Jet Fever, Caribbean Coast off a good draw, Pocket Filler, Mirak and Manchurian Tiger.

The Oaks is my mount in Race 7. She must have some sort of a chance but, unfortunately, is drawn wide at No 12. For that reason I would include Empire Of The Moon, Dirtydealin Mamma and Lady Mufffet in PAs. For the Pick 6, also put in Sunny Disposition, Madame Ming, Kailani and The Oaks. I liked Ohiki Bay last time she ran – she pulled No 1 draw and enjoys the inside track – but this time I’m going to pass her by because I’m not sure she will stay the 1800m – plus she’s got the worst of the draw.

I’m not sure my mount in Race 9, Perfect Winter can be relied on because she shows no speed at all and took forever to get going on the standside track last time. Now we’re racing on the inside track and that’s going to be even more of a disadvantage. PA punters should put in Dover Beach, Queen Eliza, Queen Of The Sky and, possibly, Sing The Blues – although I’m not sure she’ll stay. This is a “field” race for Pick 6 players because Dover Beach and Queen Eliza are three-year-old fillies and so far, they’ve not produced the goods against the older generation.

In Leg 1 of the PA, Race 3, I’m riding Delamere. He’s been in Durban so it’s difficult to compare the collateral form but he’s an improver and has blinkers on for the first time. He has to be included in all bets. Others to consider would be Brasillia, who is coming off a rest, and Lesley Strong, who ran a good race off a bad draw last time.

As for the rest of the card, pass by Race 1 because it has such a shocking field. I rode Expedition Leader last time and I’m not sure he really stays.

There’s a great Swinger opportunity in Race 2 where Tell My Star and The Good Life, who has the better draw, stand out. That said, there are first-timers in the race, so watch the betting.

Those looking for the “get-out” stakes in Race 10 should target Snappy Lad, who is 4-1 with Betting World. He should enjoy this longer distance, which he tries for the first time, and he’s got the benefit of Storey’s 4kg claim, which is a big positive over 2600m. I’m riding Signature, who seems to be a one-paced individual and, because of that, is unlikely to enjoy the inside track.

The first entries for the Emerald Cup, Africa’s richest race on sand to be run on 28 September, were finalised this week and it looks as though it’s going to be an interesting and competitive race.

I’m supposed to be riding Contrador, who I’m not sure will stay the 1450m distance. My early preference is for Here Comes Billy, who won really well from a bad draw recently. But I’m not making any firm predictions until the draws are done. Over this 1450m you can draw a line through those horses who are drawn wide. I just wish that the race was over a distance where the draw was not so biased, like 1600m, and think the authorities should consider changing the distance.