In November 1964, The Beach Boys released a song called Santa's Beard which contained these lyrics: "I took my brother to the department store, he wanted to show Santa his Christmas list ... He said, 'You're not really Santa Claus.' He's just helping Santa Claus, the real, real Santa'." MERRY CHRISTMAS. Bundu Conradie has played the role of Santa at Sandton City for the last 11 years. Picture: supplied.

Even if you haven’t cultivated your child’s belief in Father Christmas, chances are he’s already a familiar presence. Every year, a number of men around the world clothe themselves in traditional Santa attire: a red suit with white trim, boots, a hat and that long, white beard. They then go and entertain kids in shopping malls – helping Santa, of course, “the real real Santa”.

“Want to sit on Santa’s lap?” a mother asks her child at Sandton City, where Santa (real name Buntu Conradie) sits, big-bellied, on a golden throne, a sleigh and reindeer by his side. The child sinks his face into his mother’s lap, shaking his head from side

to side, uncertain and shy, though constantly looking up to suss out the jolly man in bright red clothes. 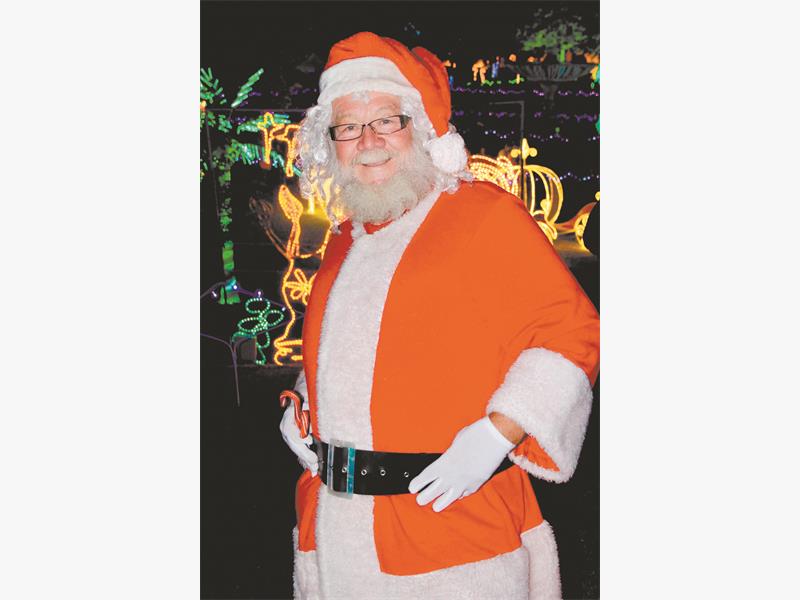 “I don’t believe the kids are afraid of me. They just get so excited, they don’t know how to react,” he says.

“Some run into my arms, some cry. But laughing and crying in this situation is one and the same. For example, once a blind girl named Joanne was put onto my lap and as soon as her mom said, ‘Hello Father Christmas’, she started to cry. I could feel her heart racing.”

Conradie (59) has been playing the role of Santa for 11 years now and loves every moment of it.

“Since I was young, I was good with small kids and I’m still good with kids,” he says.

“I live out in the middle of the Karoo and am only here for one month of the year, but during that time I give everything that’s in me to the children and that’s more than enough.”

Chatting to Christian Potgieter, 65, who plays the role of Santa Claus at Emperors Palace Garden of Lights, one realises that he sings a different tune. “It’s hard work being Santa. It takes six months for me to grow a beard and then my wife doesn’t want to kiss me anymore. Plus it takes a lot of grooming to keep it tidy and clean – you don’t want food getting stuck in there,” he says.

Potgieter’s tradition every year is to shave his beard on the 26th of December, regaining the affection of his wife.

“It’s funny,” he says. “After I’ve cleaned up I go back to visit the managers at Emperors, and they don’t even recognise me.”

It takes Potgieter 10 minutes to put on his costume, including an infectious smile. He points out that, as Santa, you can never leave the house in a bad mood. It’s a gruelling process, but one that’s certainly worthwhile. “The nicest photos taken are those that no one ever sees,” he says.

“They are the ones seen through my own eyes. Nothing can compare to the look on a child’s face when he sees Santa.”