What can you expect from the new Nokia 3310?

Imaginations were fired up all around the world with the announcement as customers’ happily relived their past with the Nokia mobile in their hands. 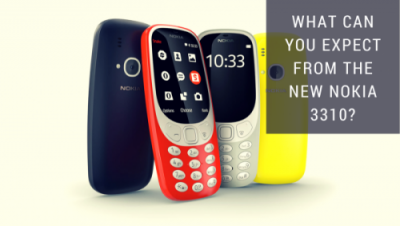 We take a closer look at the features of the highly anticipated Nokia 3310. And, if you are wondering, yes, it has Snake!

There has been much hype around the latest news that Nokia will be re-launching its famous “indestructible” 3310. Imaginations were fired up all around the world with the announcement as customers’ happily relived their past with the Nokia mobile in their hands.

Since the announcement, more has been released on the features of the phone, and we thought that we would take a closer look. What can you expect from the new take on this classic?

This new take is still a feature phone, so don’t expect any large touch screen. The build is similar to that of the old phone, although a lot more refined. The corners are rounder and the phone is slimmer and lighter. The 3310 was built to withstand almost anything thrown at it, and this new take is not expected to be any different. It has a curved screen for better readability in sunlight and has new push buttons, although they are not wildly different from the old one.

The headphone jack is now at the top of the phone and the microUSB port at the bottom for charging. A microSD slot can be found under the removable rear cover, which supports cards up to 32GB.

The new phone will be available in some fresh new colours. You can choose from warm red or yellow with a glossy finish. The grey and navy blue will both come in matte finishes.

The screen is colour and comes with a 2.4-inch QVGA 240×320 display. This is, naturally, smaller than any smartphone on the market. But you will not be watching any movies on the phone. It is certainly a step up from its older sibling.

The old 3310 was notorious for its days of battery life, and this new model is even better. The removable 1 200mAh power pack at the back of the phone will give the phone almost 31 days of standby time! The phone is also claiming to have 22 hours of talk time. This blows the old one out of the water, as it only had 11 days of standby time.

This upgrade comes packed with a camera. A 2-megapixel rear camera is one of the new additions to the phone. It, together with its LED flash, has created waves among customers. The quality of the camera is not mind-blowing, and the phone does lack a front camera, ending the possibilities of selfies.

The phone will only allow for 2.5G connectivity, meaning you will not be able to access the internet from the phone. There will not be any Wi-Fi functionality either.

Yes, the much-anticipated game is indeed back on the phone. The game has not only received its own icon on the front screen, but has also been upgraded. It is now in colour, has multiple new levels, and you can use the 4 and 6 keys to go left and right.

The phone is expected to launch in the middle of the year and is expected to go for around 49 euros, which translates to about R650. Will you be buying one?