Oprah interview: Meghan’s R77 000 dress and what it means

There was lots to unpack in Meghan Markle's dress of choice, jewellery and styling in the Oprah Winfrey interview. 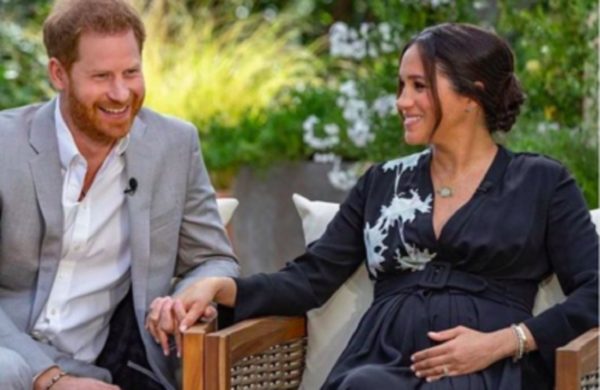 Meghan Markle and Prince Harry sat down for an extremely intimate interview with Oprah Winfrey that was aired internationally on Sunday, 7 March.

Discussing why they chose to exit the royal family and how they are coping, the juicy interview gave viewers loads to unpack but the Duchess and Duke of Sussex put on their Sunday best as the dress Meghan’s wore sold out online merely from being seen only on the teaser posted by CBS.

There is much speculation that Meghan emulates the dress code and style of Diana but aside from clean lines and classic neat silhouettes, this is far from the case.

The jewellery Meghan wore for the interview included a necklace by designer Pippa Smalls, earrings by Maison Birks and a diamond bracelet which is a Cartier heirloom from Princess Diana’s collection.

It’s been said the bracelet was worn in a move to show the late Diana was with them in spirit. Two of the bracelet’s diamonds are also used as part of Megan’s engagement ring, flanking a centre stone that came from Botswana.

Meghan is pregnant and a big part of her outfit selection could have been due to comfort.

On her feet, she wore stiletto heels from Aquazzura while her hair was swept back gently in a low chignon. In a deeper dissection of the dress, the lotus flower is a symbol of enlightenment and purity as well as rebirth.

Perhaps it could be a visual announcement of a change of life or season, since the couple have embarked on a new path and expecting a baby girl in the American summer of 2021.

Asked what message Meghan is sending through her dress Paledi says: “The fashion statement we can assume, less is more (anti obscene), on the contrary, she’s saying that she’s a minimalist and not pretentious”.

Quite the opposite of some statements about her stating that she’s trying to be something she’s not.

ALSO READ: Harry and Meghan interview to air on M-Net

Her late mother-in-law Diana, Princess of Wales, was known for fashion sense that was slightly more daring and certainly eye-catching with hair cut in a more contemporary and youthful style at the time when she was thrust into the limelight due to her marriage to Prince Charles.

Perhaps the only conventional comparisons to the late Princess of Wales that can be made are how Meghan has been treated by the British press.