Get your fix of royal news with the latest update from Buckingham Palace where, apart from the weather, there never seems to be a dull moment. 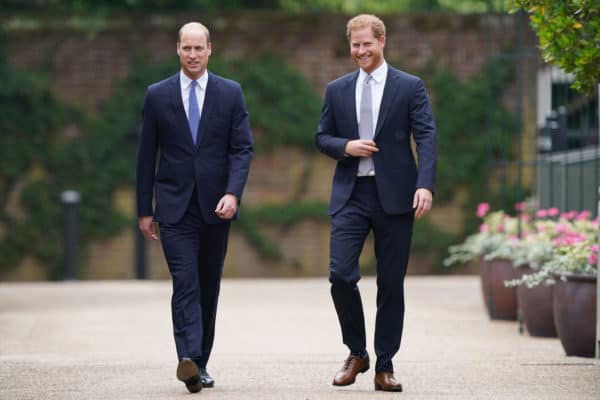 Britain's Prince William, Duke of Cambridge, left, and Britain's Prince Harry, Duke of Sussex arrive for the unveiling of a statue of their mother, Princess Diana on July 1, 2021. Picture: Yui Mok/AFP

There’s never a dull moment when it comes to royal news, especially when the family probably has the spiciest WhatsApp family chat.

This time around, though, Prince Charles has probably been privately messaging Harry to sort things out over claims made in that Oprah interview (yes, we’re still talking about it).

In other news, royal kids George and Princess Eugenie’s baby August are doing what they do best…being adorable.

Daily Mail reported the intention of the dinner was for Charles to “thrash things out with Harry”, following the explosive interview he and his wife had with Oprah Winfrey.

England fans are heartbroken that Italy claimed victory in the Euro 2020 final. Among them are the royal family who were at Wembley Stadium to support their home team. The family were seen rejoicing with cute hugs when England scored their first goal, but later looked crushed when England lost in the penalty shootout at the end of the game.

Princess Eugenie took to social media to share an adorable video of baby August ahead of the Euro 2020 final to show their support of England. The video shows baby August dressed in a tiny white England football kit onesie, with the added song Three Lions ’98 playing in the background.

Want to own Prince Charles’ car? R1.6 million is what you’re looking at if you decide you want to get your hands on his Tesla which has recently been put on the market in the UK. According to an article in The Daily Mail, the car is only six months old and is on loan to the Prince and his household to test out as another environmentally friendly car by the royal family. This is in addition to his electric Jaguar I-Pace.

If you loved Kate Middleton’s pink shirt dress at Wimbledon, check out how to steal the look here. We’ve researched on how to achieve the look here and found local stores in South Africa where you can recreate some of her most iconic moments.