When pain makes you cruel

NICU can bring out the BEST and the WORST in you. This #nicuawarenessmonth we are sharing stories from beside the incubator. The NICU is a place of complicated and unpleasant feelings.  One moment you are swooning, the next you are hyperventilating with panic, in one breath you go from pragmaticist to optimist to fatalist to sadist.

The most loathsome feeling we had as parents in that room, which is going to make us sound like certified sociopaths, and I am sure very few would be caught dead voicing this feeling out loud, was something I can’t quite label but was something similar to gratitude, a good dose of relief, tinged with a generous pinch of smugness.

This horrible sense of “winning”, arose from the fact that we were by far the luckiest parents in that room. Our daughter was only 5 ½ weeks premature, some of the babies had already been hospitalised for several weeks and would be there still for several more. The general rule of thumb is that the baby will be in hospital roughly for the same amount time it would have needed to remain in the womb to be considered full-term – 38 to 40 weeks. The earlier the baby is born ahead of the due date, the lower the chance of survival, thus the greater the need for medical intervention and supervision.

So, as an example if, a baby is born at 23 weeks it has a 20% chance of surviving, whereas a 26-week baby’s chances spike to 80%. The baby born at 26 weeks will need to remain in an incubator in the care of the hospital for at least 14 more weeks. Babies born at 35 weeks, like our daughter, have a 99% chance of survival as long as there are no complications, unlike our daughter.

There are many things, a “moderately premature” baby is at risk. One of which is jaundice, a common condition for all infants, even full-term ones. But for pre-term babies, it can be caused by an immature liver not being able to properly break down red blood cells. It is often easily recognised by yellowing of the skin.

Our little one did have a bout of jaundice but it was brief. The treatment for jaundice is to place the infant under UV lights, to which the nurses add some humour. Each wrinkly being under the gaze of lights receives protective eye gear – a little material eye mask with a photograph of Rayban sunglasses printed onto the fabric. So as you walk through the NICU you could be convinced that all these babies are on an all-expenses-paid – by parents and medical aid – holiday to the Med.

Another common issue relates to feeding. A preemie may not yet have developed a “suck reflex” – knowing how to suck, swallow and breathe. This is normally developed post a gestational age of 32 weeks. Our daughter never struggled with this her, “suck reflex”, it was strong from day one. Thus she was never on a feeding tube, which is as bad as it sounds. It is a tube that runs through the baby’s nostril down their oesophagus into their stomach, and requires the carer to pour formula or milk onto a little cup and hold the cup up high so gravity can do its work, whether the baby complies or not is of no consequence, the food is going in regardless.

This was one area, my husband and I, felt like we were “winning”, our baby was strong and her suck was strong. Unlike, many of the other parents who sat there holding their feeding tubes aloft and trying to pretend this was fine and not devastating, we could feed our baby the ‘normal’ way.

Another issue babies in NICU experience is regulating their body temperature, no baby can, that’s what mom is for. But in NICU baby’s spend a lot of time alone, often naked bar a nappy and lots of wires. Inside the ward, there are babies in various spaces. There are some in isolation rooms – I would say they are the most at risk. Some were in incubators, only able to be touched through little portholes in the side of the container, these we assumed were somewhere in the middle of and then there are the babies in the radiant heaters, like ours. My husband and I naively allocated the label of least at risk to these babies.

Our Baby: 2. Other NICU babies:½ (many were also in the radiant heater).

When our baby was discharged from NICU into High Care she was placed into an incubator, “Why?”, we asked the nurse, worried at why she seemed to be going backwards in her recovery. To which the nurse responded, “We put them in the incubator when they are getting better. The radiant heaters are used for very sick babies – it’s easier and faster to get to them should they go into cardiac or respiratory arrest and need to receive intubation or chest compressions.”

Right. Glad I didn’t know that six days earlier. At least we were comforted by our naïve stupidity, even if it was short-lived.

Now, looking back, I am incredibly ashamed at having this vile response to the trauma of having a baby in NICU, but you cope with the stress and fear in whatever way you can when you are in the moment. So, was it my finest hour? No. Did it hurt anyone? Also no.

But until you have been there, you cannot understand how hard it was to not stare and imagine what the family next door or across the ward were going through and thank our lucky stars that our baby’s suck reflex was strong, that I had had steroids so her lungs were strong and that she was only five weeks early versus eight.

On seeing other babies even teenier than our little spider monkey with ventilators covering their mouths, feeding tubes snaking into their noses in addition to the monitors and drips was almost too much to look at but at the same time, morbid curiosity meant we did.

To feel a surge of relief and fringe, almost nebulous, feeling of hubris when comparing our experience to those whose nightmare far exceeded our own, can be put in to the long and windy column of times we didn’t live up to expectation (our’s and other’s) or have the purest of feelings after becoming parents. But such is perfect-ish. Always a work in progress.

The day our baby was released could not have come sooner, my husband and I were both struck by such relief to be away from the distress of the paediatric wards, it is a place where a group of strangers together simultaneously experience the worst and best moments of their lives all the while isolated in their own little biome of hope and despair, anguish and joy, grit and helplessness, self-control and vulnerability.

How ironic that in less than 48 hours we would be begging to return our daughter to the familiarity of the hospital and the protection of its trained professionals?

READ “I had a feeling something was wrong after my baby was born. I was right.” TO FIND OUT WHY 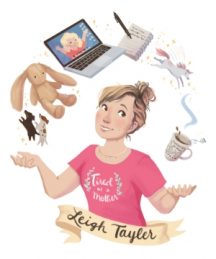 Leigh Tayler is a writer, a Leo, a feminist, a fan of The Walking Dead, a lover of all things unicorn and nearly succumbs to rage strokes on the daily. Oh, and she also happens to be a mother to one small feral child. She wears her heart on her sleeve and invariably tells it like it is, the good the bad and the ugly. She juggles her writing, her family, her sanity in-between a demanding career in advertising. She has no shame in sharing her harebrained and high-strung anecdotes on her experience of motherhood, no sugar coating, no gloss, just her blunt truth with a healthy side order of sarcasm. Find her on her blog, The Ugly Truth of Being a Mom.