These kids are not in school because their future is not a concern for them. Survival is. Imagine being a 14-year-old, tasked with the responsibility of carrying your siblings on your shoulders. This is the reality of Durban Central boy Sakhile.

Sakhile stood by the robot in Inanda, Kwa Zulu Natal begging for money.

During the festive season, Sakhile managed to put together enough money to buy the following:

Sakhile purchased these things because he wanted his family to at least have something to eat during the holidays.

His mother has been ill in hospital and recently passed away which forced him to become a breadwinner for his family.

What were you thinking about when you were 14-years old?

Was it “what are my siblings going to eat tonight?”

And his situation is not unique.

There are thousands of children in this country who are heading homes due to being orphans or negligence.

According to the Parliamentary Monitoring Group: “In 2015, Stats SA’s General Household Survey showed that there are about 90,000 children in 50,000 child-headed households.”

These numbers have dropped to 33,000 households according to The Children’s Court. This was for 2018. There are, therefore, about 55,000 children in child-headed households.

No child should be concerning themselves about running a household when they are supposed to be living their lives and figuring out where to play next. The harsh reality of poverty burdens even the most mature adult.

What would it then affect a child?

Fortunately for Sakhile and three others like him, they were identified by a Durban Central-based organisation called Siphila Ngomusa Community Development.

It is run by Nomvula Shale, a woman who is passionate about helping those who need help the most. Nomvula identified two girls and two boys, one of whom was Sakhile begging at the robots. She posted some pictures of them on Facebook asking for assistance during the holidays. 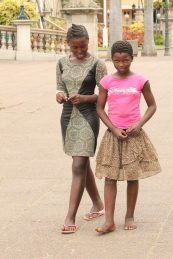 Some users were able to assist and donated clothes to them, and they had smiles on their faces as they wore their Christmas clothes. The heartbreaking truth of this story is that we drive by children like Sakhile on our way to work every day. So many of them have resorted to drugs, some girls even get caught up in prostitution.

I have never stopped to think about what their stories are and what could lead them to such a dark place or wonder why they are not in school.

They are not in school because their future is not a concern for them.

Siphila Ngomusa Community Development plays an important role in feeding those that are in need. It was started in 2006 to help those living with HIV. It has since grown to lend a helping hand to those who need it. Whether it be victims of HIV or the homeless. They currently feed 900 people at five different sites per day.

Because of organizations of its nature, 4 kids have been removed from the streets.

The struggle continues, though. There are still thousands of child-headed homes roaming the streets carrying adult burdens.