Mom shares how she weaned her toddler off the bottle

With a child addicted to her bottle, this mom used aloe to successfully wean her toddler off using a bottle to a sippy cup Almost everyone who grew up in KwaZulu-Natal like me, raised by ugogo (Granny), knows about inhlaba (aloe) and how it has been used over the years to stop babies from breastfeeding. They know the pacifier struggle or getting them off the bottle but, not in my wildest dream did I ever think it would work with my daughter who is two-years-old and was very much attached to her pink bottle.

After having her in 2018, I did not have enough milk to breastfeed, so we resorted to formula and she has been attached to the bottle ever since. As time went by, we gave her formula and rooibos tea during the day since she was a big girl, a decision mommy is not proud of but hey, motherhood is all about learning.

She was drinking more than she needed, ate less and we changed diapers now and then.

Fast forward to now! She is a bubbly intelligent girl who still demanded her bottle and couldn’t sleep without it. I would wake up in the odd hours of the night because little missy was thirsty and wanted her midnight feed. That was my life until my mother-in-law suggested that we try to get her off the bottle.

I thought it was a great idea but was reluctant because I felt sorry for my poor child but had to give in. This girl is going to be a big sister soon.

I remember it was a Wednesday morning, daddy managed to get inhlaba and I was not interested in seeing her cry, so I did not want to get involved in their whole #getoffbottle business. After having breakfast, she asked for her bottle and I directed her to gogo who gave it to her after rubbing inhlaba on it. It only took one suck and she tossed it on the floor saying “yimbi lento” which translates to this tastes bad.

Being the drama queen that she is, we never heard the end of her bottle story, she kept telling us that it tasted bad. I must say I was impressed but was more worried about the night.

The night I was dreading came and gogo made sure I had inhlaba and the bottle next to me just in case she wanted it and yes, she did ask for the bottle. As per gogo’s instructions I gave her some (with aloe rubbed on it).

She spat and cried and eventually fell asleep minutes later. The same routine went on every day and I remember this one time she threw the bottle in the bin whenever she would ask for it. We would remind her that it is in the bin. And that was the end of her journey with the bottle.

I did mention that she was so attached to her bottle and I didn’t think she would give up on it so easily. It took us less than a week and she is not even on a sippy cup but a normal cup. Bought her a pink smiley cup as a token of appreciation for being a big girl. 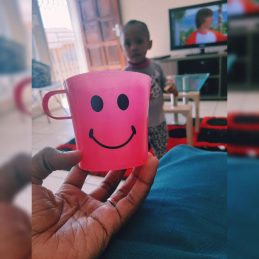 With the new baby coming soon, I am very proud of the progress she is making. She is becoming an independent young lady who asks for water (in her pink cup) with every meal and hardly mentions the word incence (bottle) like she used to before. We are sleeping longer at night, eating a whole lot more, and using fewer diapers.

I must say for some of us the nationwide lockdown is working to our advantage. As a toddler mom, I wouldn’t have been able to get her off the bottle sooner had I not been at home. 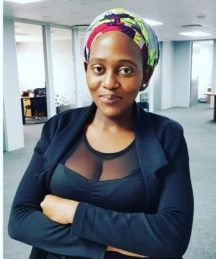 Pamela Mkhize is an experienced social media manager and journalist holding a BA Media and Communication Studies degree from The University of KwaZulu Natal and a Project Manager Certificate from Varsity College- Business School. Above all else, I am a wife and a mother to a beautiful baby girl (expecting our second born soon) and a digital communications professional. I enjoy sharing my motherhood journey which has taught me so much about myself through writing.