Men’s fashion back to old normal in Paris

The hotly tipped Ami-Alexandre Mattiussi is expected to present a mixed men's and women's show on Thursday. 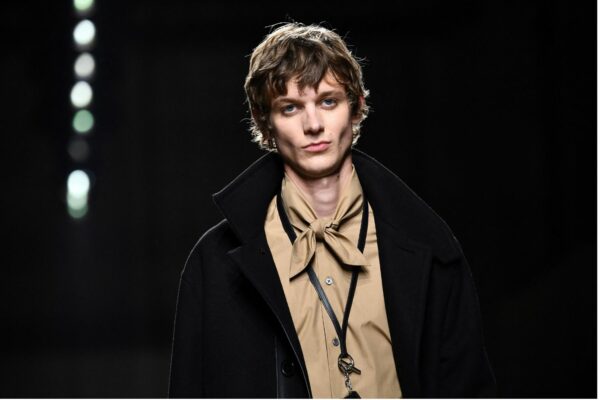 The first Fashion Week without any Covid restrictions, the men's ready-to-wear week is back in force in Paris with the very symbolic return to the calendar of Celine by Hedi Slimane. Anne-Christine POUJOULAT / AFP

It is back to the old ways for men’s fashion week, which kicks off in Paris on Tuesday, with the last pandemic-era restrictions cleared and the surprise return of Hedi Slimane of Celine, who had previously called official fashion shows “obsolete”.

Even during previous waves of infections, the fashion crowd was never particularly keen to see their make-up smudged by a mask or their partying constrained by social distancing.

But with the last restrictions on international travel dropped, this week will see the return of several big names, including US designers Tom Browne, known for his creative shows, and Matthew Williams of Givenchy.

The biggest surprise, however, is the return of Slimane, creative director of Celine and one of the most influential figures in men’s fashion of recent decades, who will close out the week on Sunday.

One of the key brands within the LVMH group, Celine last presented as part of the official fashion calendar in February 2020, before Slimane dramatically announced that the traditional timetable was “obsolete” and “archaic”.

“These days, creating a sense of event and rarity seems more essential than an obligatory exercise at a fixed time,” he told Le Monde at the time, and has since been releasing collections for men and women at his own pace, often with films shot in luxurious settings around France.

The house did not respond to AFP’s query about its change of heart.

In the lead-up to the pandemic, there had been a widespread sense that the fashion calendar’s pace had gotten out of hand – both physically exhausting and environmentally unsound.

But two years of pandemic left many eager to return to the festive atmosphere around fashion weeks.

“We are very happy that Celine is back,” said Pascal Morand, head of France’s Federation for Haute Couture and Fashion. “We don’t have any other comment to make, other than to rejoice.”

Meanwhile, in the ongoing debate about gendered shows, Paris finds itself as something of a halfway mark between London – which has removed the divide between men’s and women’s shows – and Milan, which has reaffirmed the split out of fear of undermining traditionally male-focused brands.

“Paris will be a bit of both,” said Morand.

“The trend for non-gendered clothing created by streetwear and sportwear is deep and societal – it’s long-term.

“But the male-female divide still makes a lot of sense,” he added, especially since there is a real sense of “innovation and creativity” in men’s fashion at the moment that warrants a dedicated showcase.

One example is the hotly tipped Ami-Alexandre Mattiussi, who is expected to present a mixed men’s and women’s show on Thursday.

The studio started off as a hip men’s brand in Paris but also made its mark on the red carpet at the Cannes Film Festival, dressing Spanish icon Rossy de Palma and France’s Sophie Marceau.

Other highlights this week include Marine Serre, presenting for the first time in the men’s week, having made a a name for herself in womenswear with green-minded, up-cycled clothes and innovative shows.

Louis Vuitton has yet to designate a successor to Virgil Abloh, who died from cancer at 41 in November, but will this week present a collection created by his staff.