Only 20 of these Balenciaga speaker bags will be made available

The hybrid bag has a hard shell that opens at the back to store the bare necessities, and also features a speaker with all the features necessary for listening to music, including Bluetooth technology. 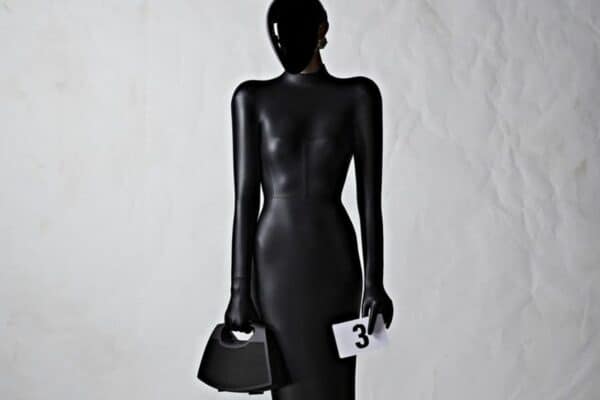 It seems like every Balenciaga fashion show or product launch these days seems to whip up a frenzy, despite the sometimes outlandish nature of some of the creations. During the Fall-Winter 2022-2023 haute couture shows, the fashion house caused a sensation with a new handbag – and not just any handbag – since this is (oh joy!) a speaker bag that combines style and music.

It’s no secret that Georgian designer Demna Gvasalia is a fan of hacking everyday objects and transforming them into couture creations, or even that he’s driven by the idea of playing with the street-level codes of the masses. But he has once again pushed the limits of creativity by imagining the ultimate accessory: an ‘it bag’ that’s also a speaker. This is something that’s sure to please the brand’s well-heeled clients – Kim Kardashian, Alexa Demie and Dua Lipa, for example – who had the opportunity to get a close look at the bag during the brand’s latest haute couture show.

With busted up sneakers selling for more than €1,000 a pair, hybrid pants halfway between jeans and cargo shorts, or a parka worthy of the finest road safety campaigns, Balenciaga rarely does anything by halves. And that’s a good thing, because this largesse is precisely what appeals to the brand’s most prestigious clients, as well as mere mortals. As such, it’s no wonder the brand is now considered one of the most popular in the world. And it’s not about to stop doing what it does best. Indeed, Demna Gvasalia is a committed designer who seems to be bursting with creativity, always in tune with the issues of our time, as evidenced by his latest fashion creation that’s got social media in a spin: a speaker bag.

While there’s nothing innovative about the speaker bag itself, this is the first time that it’s been shown in a couture version likely to land on the most prestigious red carpets. The result of a collaboration with Bang & Olufsen, a Danish firm specializing in audiovisual devices – which recently partnered with the Supreme brand – the hybrid bag has a hard shell that opens at the back to store the bare necessities, and which also features a speaker with all the features necessary for listening to music, including Bluetooth technology. It’s enough to make you the life and soul of the party.

Already on sale in Balenciaga’s new couture boutique, which recently opened a few blocks from the Champs-Elysées in Paris, the speaker bag should soon find itself being copied far and wide. Its price is still a mystery, however, and that’s probably not a bad thing.