The hotel chef has faced a few obstacles in his career, but he didn't let that or his speech impediment derail him. 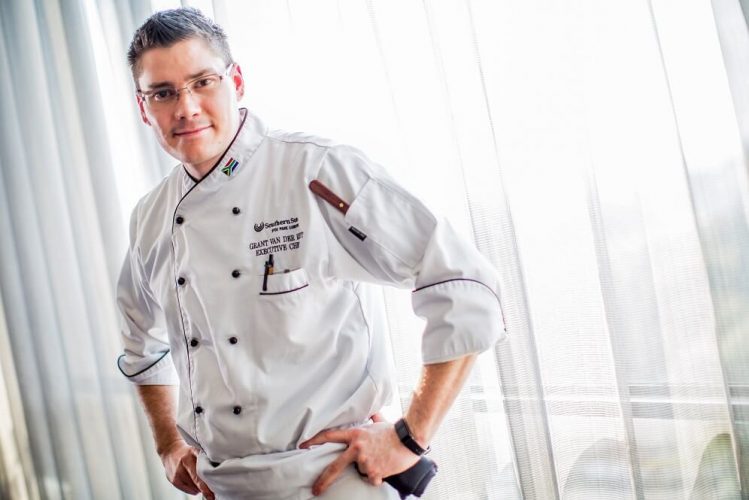 Though he says being a chef – an executive chef in his case – involves long hours in the kitchen and getting up at the crack of dawn, Grant van der Riet says he couldn’t have it any other way. He explains that the job puts food on the table for him, his wife and son, and a smile on his face at the end of each day.

A blessing in disguise

Van der Riet says although he grew up in a family that loved cooking, the way he finally landed in the kitchen involved an incident that was not really pleasant.

“I was moved from the school I was in at about the age of 14 because I had a very bad speech impairment,” he says. “Then, it was recommended that I be moved to a school that has art and cooking.

“I remember arriving in the middle of the year and it was a show day, and I was suddenly interested in a class were I spotted a few kids cooking, and despite that there was no space in that class, I insisted and space was created. The other school letting me go was a blessing in disguise.” A family that cooks

“Growing up, I always loved cooking. My grandmother used to make wedding cakes, and my mum and aunt used to bake a lot,” he says. “I knew that every time I go to my aunt’s place there would always be a freshly baked cake, plus my mother used to be in the kitchen almost every day, but left Sundays out for my father.”

He says his mum loved baking biscuits and cookies, and his father would cook pasta on Sunday.

Van der Riet says climbing the ladder in the hospitality and food industry was difficult, explaining that he nearly gave up.

“This is when I was 21 years and just met my girlfriend. I was in the industry for two years and my boss at the time was extremely hard and shouted at me every day. So one day I mistakenly burned the sauce and he threw the hot pot at me … I luckily ducked it.

“It was quite abusive and I decided to leave the job,” he says, explaining that he went to join his parents’ business and had a 9am to 5pm office job. “At first, having the weekends off was fun, but it started to sink in that there was no enjoyment in my work.”

He says his job was calling people every day, asking them if they would like to sell their houses. “This other lady I called then got annoyed with me and said I should go get a real job,” he says with laughter, adding that this is what led him back to cooking.

He got his old job back in 2007, got promoted two years later, moving up the ranks to sous chef, executive sous chef and ultimately moving from restaurants to hotels, and to executive chef. “

I love working for hotels because they have better structure and balance with family.” “My food is very Italian, but I’ve gone back to the basics with a lot of it,” he says, adding that what he has established is that a lot of food in both restaurants and hotels is a bit too complicated and has too many components on a dish that confuse the palate.

“What I’ve done is focus more on flavours and less on plating. Portions are also important, and we give great portions at Luce restaurant [at Hyde Park, Joburg],” he says. “It’s all good to look at a dish and find it amazing.”

“When my wife is at work and the kid at school and I’m not at work, I compile my music list. I have a lot of music on my phone, from R&B to heavy metal and pop,” he says, adding that on a bad day, he would go for the heavy metal, a few beers and a cigarette.

“I also love making pasta and potjiekos when at home.”