A report on Friday claimed that the military is nervous about exposing its members to the heart of the outbreak. 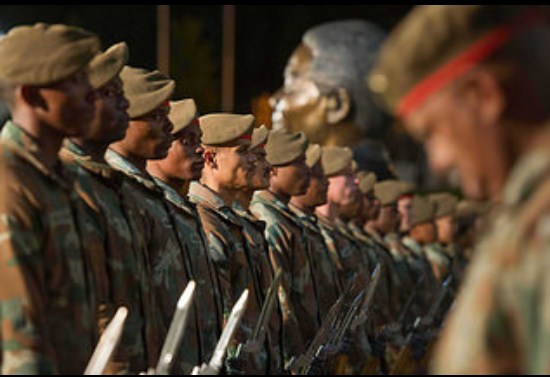 After the Mail & Guardian reported on Friday that the plane apparently already standing at the ready to evacuate 151 South Africans trapped in Wuhan, China, has been struggling to find a willing crew, Health Minister Zweli Mkhize quickly moved to repudiate the report.

Mkhize told the SABC on Friday that his discussion with the chief of the army, General Solly Shoke, suggested there was no such problem.

“The fear is unfounded but we will not be able to talk much about it because the SANDF, the chief of the army and the [defence] minister have not said anything to us about it,” he added.

“There is no truth whatsoever about the story in the Mail & Guardian,” he was quoted saying by Pretoria News.

The first case of the coronavirus was announced on Friday after a patient in the KwaZulu-Natal Midlands tested positive after returning from a holiday in Italy. The 38-year-old and his family travelled via OR Tambo International Airport on Sunday and then flew to Durban’s King Shaka International Airport.

He reportedly experienced flu-like symptoms three days later and went into “self-isolation” after seeing his doctor, who also self-isolated. The man’s children’s school, Cowan House Preparatory in the Midlands, was closed on Friday as a precaution.

There are reportedly 184 citizens in total looking to return home from China.

The M&G reported that “no crew members are willing to make the potentially perilous journey”, quoting a “senior official”.

The evacuation is meant to happen sometime after next week, but the air force suddenly had to deal with the problem that it could not “force” personnel to head into the epicentre of the virus outbreak, and the military itself had supposedly “advised against the evacuation”, which is now being denied.

Nearly 3,000 Chinese have died in the outbreak there.

The South African citizens being repatriated are meant to be taken to a secure facility in the Free State where they will be quarantined after President Cyril Ramaphosa last week ordered their repatriation.

The Citizen reported this week that the citizens could be quarantined at the Black Mountain Leisure and Conference Hotel in the heart of Maria Moroka Nature Reserve in Thaba Nchu, Free State.

Though this was yet to be confirmed by the department of health, the strongest indication that the hotel, about 80km east of Bloemfontein, would be used for this purpose was from a communique that Monyatso Mahlatsi, the Free State provincial secretary of labour federation Congress of the SA Trade Unions (Cosatu), had sent out to members.

“…be informed that the students from Wuhan Province who are in the area affected by coronavirus area will be recalled and placed in Thaba Nchu for a period of 21 days under quarantine… The Black Mountain Hotel will be utilised for the purpose and the army will be deployed for the purpose,” he said in the message.

In the message, Mahlatsi also directs the SA Commercial, Catering and Allied Workers Union (Saccawu) to “immediately dispatch comrades there to meet with management and ensure that our members are not negatively affected and that proper training and resources are availed for them during that period, should they be required to provide services”.

He confirmed sending out the message but said the provincial health department had refused to confirm or deny the hotel will be used.

The Black Mountain Hotel, which according to its website boasts 118 en-suite rooms constructed in four levels, with private gardens or balconies, is only 6.7km away from the abandoned and derelict Thaba Nchu airport.

However, it is unlikely the airport will be used, given earlier reports which suggest the government will charter an aircraft (possibly from South African Airways). Aircraft capable of a flight from SA to China would be too big to land at the Thaba Nchu airport.

However, the SA Air Force facility at Bloemspruit (part of the Bloemfontein airport complex) does have runways long enough to accommodate intercontinential jets.

The Citizen has learnt from a reliable source that the 3 Military Hospital in Tempe, Bloemfontein, was being prepared as one of the venues for the coronavirus quarantine army base. Staff at the Tempe base were apparently not told where exactly this quarantine would be.

The SANDF officially confirmed yesterday it was part of a multidisciplinary team supporting the health department and international relations and cooperation department, as instructed by Ramaphosa.