The roses are entering their dormant period and this is the month to make sweeping changes in the garden without affecting existing plants. 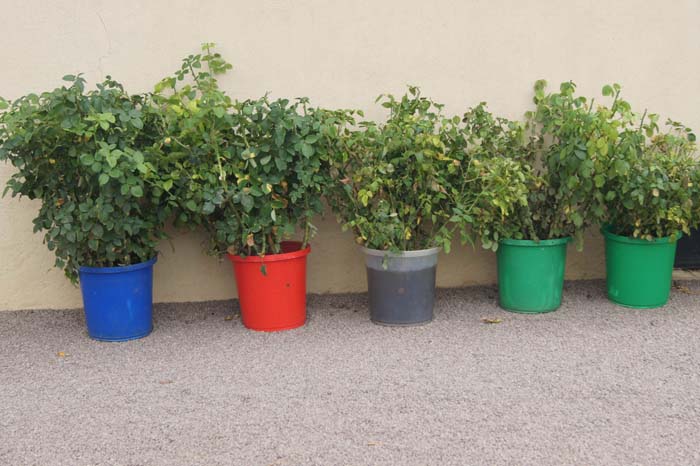 Roses in buckets filled with water can survive if replanting is delayed.

This can involve redoing an entire rose bed, or moving it, or changing one’s whole approach, either extracting roses from mixed borders or breaking up a formal bed and interspersing the roses among other plants. It may even be the time to bring in the builders to lay new pathways.

Although it is not ideal, roses don’t have to be transplanted immediately. They can be kept alive if the roots are covered and kept moist. Recently, we had to lift four-year-old roses within a day because of the installation of drainage pipes at our nursery in Hillcrest. The roses were dug up, cut back by a third and then placed upright on a concrete platform where the roots were covered with potting soil. Others were planted into large plastic bags. A month later all had sprouted and made new leaves, and when I scraped away some of the potting soil there were lots of white hair roots. As trees grow, roses planted under trees can be affected by root competition and too much shade. Picture: Supplied

Closer to home, at the farm, we also had to dig up a new rose bed that had been established on top of the septic tank and French drain. The roses were dug up and kept in buckets with water. After some days the leaves turned yellow. On replanting, eight days later, the small inside growth was pruned out, but the yellow leaves were left on. This was done in February and the rainy weather helped, otherwise we would have had to cover them with a light shade cloth for a week until newly grown hair roots got the sap flow going again.

Other ways to store roses out of the ground is to cover them with sacking that is kept wet or in a trench that is filled with soil and kept moist. When the time is right to replant the roses, it is most important that the new position is prepared in advance and the soil is well aerated and super friable, making it easy for the roses to develop new roots. That means mixing generous amounts of compost and organic material like peanut shells into the soil to a depth of 30cm. The soil in the bed should be spongy, fertile and drain easily.

I need to emphasise, however, that it is always better to transplant roses as soon as possible after they have been dug up. This minimizes the root stress and increases the rate of success.

Whatever the circumstances, this is the method that we follow when transplanting. Cut back the foliage by a third to a half. Water the night before so that the soil is soft. If you are transplanting more than one rose bush, attach a name tag to each bush because it is easy to become confused once the bushes have been cut down and are out of the ground. The next day, dig a circle around the rose, about 30cm from the stems. Push in the spade at a slight angle in order to cut the roots anchoring the rose. Once the roots have been cut, lever the rose out of the soil using the spade or two spades on either side of the rose. Do not pull the rose out. Cut off any broken or damaged roots.

Daily hacks: Homemade pesticides and repellents to protect your plants
2 months ago
2 months ago

Daily hacks: Homemade pesticides and repellents to protect your plants
2 months ago
2 months ago