Like most hoity-toity industries, the fashion world tends to take itself a bit too seriously. Sombre, pouty models strut up and down runways wearing ensembles that have been deemed to be on-trend by designers and those in the know. Somewhere across the globe from these fashion shows, experts spend hours arguing the merits of emerald green versus taupe behind closed doors, and then filter their conclusions down to the average Joe.

Some people, however, are trying to have a little more fun with their fashion. Perhaps the inspiration came from Lady Gaga’s bizarre Kermit the Frog ensemble, or her Hello Kitty- adorned dress, but toys as fashion accessories are becoming popular. Swatch’s Kidrobot watches have been around for a while and are a good example of the marriage between toys and popular couture. Kidrobot designs vinyl designer art toys – think funky bunnies that range from being cute to downright creepy. Swatch brought out a line using the iconic toys as design inspiration, complete with a collectable bunny in the pack.

Marni launched its delectably spicy Marni fragrance last week – and it comes with a tiny Bambolina stuffed keepsake. The Bambolina is as “designer” as the perfume itself, and will no doubt pop up on handbags and key rings as a status symbol among the trendy set.

Toyboy Designs has created a line of Lego inspired fashion and decor accessories. The Johannesburg-based company is headed up by Hendrik Smit and Reynier Krause, and focuses on pop-art inspired themes and everyone’s favourite kiddies’ building blocks. Who wouldn’t want to wear something that’s both trendy and nostalgic? 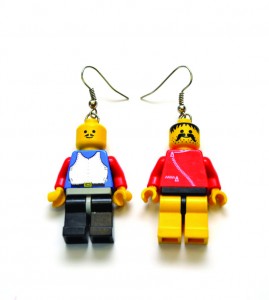 Perhaps the toy themed trend comes from a need to be a little childish sometimes. Fashion is meant to be about self-expression after all, and most people don’t take themselves as seriously as the hallowed fashion elite.