This new desirable and outstanding Cayman sets all the benchmarks. There is no subtle way to say this, so I’m just going to blurt it out. Not all that long ago, there was no way I would recommend owning a Porsche Cayman to a motoring enthusiast. Sure, buy one for your girlfriend or boyfriend, or even yourself, should you really have felt the need to own a Porsche. Good looking it wasn’t, and it was not really that dynamic either. But the previous generation Cayman started the change that saw the car become far better looking and more dynamic at the same time.

And now with the new 718 Cayman that offers even more power, increased torque, a higher top speed, along with a stylish redesign, the new Cayman sets all the benchmarks.

Marry this with a completely retuned chassis that allows for superior precision and further improved lateral stability, and the Cayman now is a sports car that simply has no competition and would be welcome in any motoring enthusiast’s garage.

And to drive this point home, a select group of motoring journalists were invited to a drive event at the brand’s home in Stuttgart, Germany. The plan was to put this new model’s sharper handling credentials to the test in and around the winding, mountainous roads of the Black Forest. 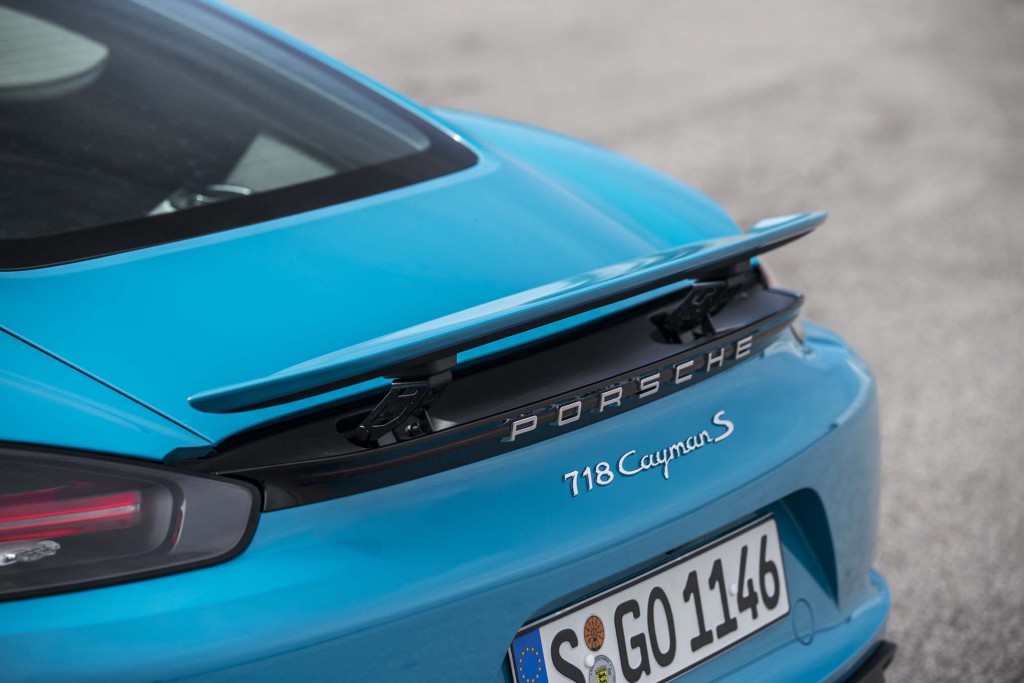 In regard to driving dynamics, the new model follows the traditional four-cylinder, mid-engine approach, implemented in Porsche’s infamous 718 race cars of the 1950s and 1960s. With unrivalled agility and performance, these cars produced numerous motorsport race wins, including the Targa Florio and at Le Mans.

Evolving this concept further and carrying forward the legendary 718 name, the Cayman range, for the first time, now has a newly developed turbocharged four-cylinder flat engine. The engines, which boast significantly increased power and efficiency, excel with more spontaneous response and free-revving properties up into the highest ranges, producing the signature Porsche sound and overall driving experience.

The base model 718 Cayman is now driven by a newly developed, 2.0-litre, 220kW/380Nm engine. Featuring a turbocharger with Variable Turbine Geometry (VTG), the 718 Cayman S boasts 2.5-litres of engine displacement and a meatier 257kW, with a maximum torque at 420Nm.

With the new turbo engines, the new 718 coupes are certainly quicker than the outgoing naturally aspirated models, and I guess even more so up here in the thin, power robbing air of Johannesburg.

Thanks to a new Dynamic Boost function, and when equipped with the standard (in SA) seven-speed Porsche Doppelkupplungsgetriebe (PDK) and Sport Chrono Package, the 718 Cayman is said to sprint from 0 to 100 km/h in 4.7 seconds, while the S-version achieves the same in 4.2 seconds.

The top speed for the base model is 275km/h; its sibling tops out at 285km/h. An additional advantage of turbocharging is reduced displacements. The four-cylinder engine with PDK gearbox in the 718 Cayman is now claimed to use just 6.9-litres/100km in the NEDC, while the 718 Cayman S with the same setup consumes just 7.3-litres/100km.

Due to the increase in the car’s performance capabilities, stronger brake systems have been implemented, with 330mm brake discs in the front and 299mm discs at the rear. Porsche engineers have also equipped the range with the multicollision braking system, which when activated, reduces the severity of a secondary collision by automatically braking the vehicle after initial impact.

The electromechanical steering now featured in the 718 Cayman is 10% more direct than its predecessor, making the model even more agile and easier to handle, as already said. This improvement was achieved thanks to adopting the steering equipment of the 911 Turbo, with its more direct gear ratio.

When the optional Sport Chrono Package is chosen, Porsche Stability Management (PSM) offers a PSM Sport programme. When activated separately, this feature presents an extra level of sporty driving for skilled 718 Cayman drivers, who want to experience the limits of vehicle performance even further. While PSM remains active in the background, this feature leads to a driving experience that takes the new model even more in the direction of motor racing.

Lowering the car’s centre of gravity improves performance, as optional Porsche Active Suspension Management (PASM) with a 10mm lower ride height is available for both coupes. Meanwhile, ambitious drivers of the S variant who require much stiffer tuning in Sport mode, for the first time have the option of PASM sport chassis, which offers a 20mm lower ride height. The retuned active chassis in both models provides an even broader spread between long-distance touring comfort and dynamic sporty stiffness.

And although we weren’t barrelling through the Black Forest at race type speeds, there were times we could test the PSM Sport programme properly enough, and the limit of grip was well beyond what the average Sunday blast will ever require. It is that good.

Additional new and improved assistance systems give the opportunity for further customisation of the 718 Cayman in accordance to personal preferences. This includes the optional Adaptive Cruise Control (ACC) featuring a coasting function for enhanced efficiency.

Internally, the cockpit is redefined with upgraded elements to increase sophistication and performance. Porsche Communication Management (PCM) includes mobile phone and audio interfaces, and a 150-watt Sound Package Plus.

Featured for the first time in the Cayman range is the new sport steering wheel (taken from the 918 Spyder), which when combined with the optional Sport Chrono Package, features a driving programme switch.

Consisting of a rotary ring with four positions, it enables drivers to select a driving mode, such as: “Normal”, “Sport”, “Sport Plus” and “Individual”. The latter setting facilitates individual vehicle configuration of the PASM, active engine mounts, PDK shifting strategy and sports exhaust system.

The bottom line is the new Porsche 718 Cayman is every bit a very dynamic and fast Porsche; underestimate this car at your own peril.