Dicing with death for a good cause

Stuntmen Enrico Schoeman and André de Kock are set to 'play with fire' to raise funds for Cansa. 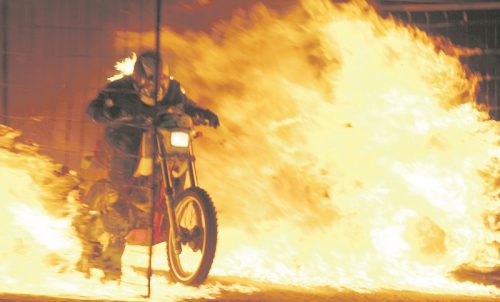 Carnival City on the East Rand will be a hive of thrilling motorcycling activity on December 10 with awesome stunts, men on fire and Harley-Davidson rides, among others. The event will start in the venue’s parking lot at 2pm and includes a static display of new and vintage Harley-Davidson motorcycles.

Live bands and entertainers are expected to perform throughout the afternoon, with food and refreshments available at an array of stalls.

As the sun sets and dusk creeps in, two of South Africa’s oldest stuntmen will literally play with fire.

First, Enrico Schoeman, 60, will be set on fire before riding the gauntlet through a tunnel of raging flames, then 62-year-old André de Kock, The Citizen’s motorsport editor, will crash a burning car through a pyramid of burning car wrecks.

De Kock and Schoeman hold the Guinness World record for riding a motorcycle through a tunnel of fire. This will also mark the last stunt ride for Schoeman’s trusty motorbike, as it will be auctioned at the end of the event.

The proceeds will be donated to the Cancer Association of South Africa (Cansa), a nonprofit organisation. The auction also presents an opportunity for enthusiasts to bid on a Guinness World record-holding motorcycle.

Gold Rand Harley has also invited motorcyclists to test ride five of their latest Harley-Davidsons. Riders must have valid motorcycle driver’s licences and a helmet. Harley-Davidson clubs have also been invited to display their machines on the lot, with a competition to find the most beautiful and cleanest bike.

There will be no admission charge, apart from Carnival City’s R10 parking fee. All proceeds raised will be donated to Cansa.