The Leaf Nismo will launch in Japan at the end of July 2018. 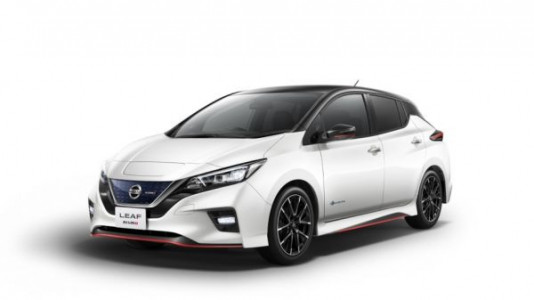 The Nismo performance version of the Nissan Leaf EV that people have long been hoping for is on its way. Although the images from the Japanese automaker show its in-house tuning division has finally had its way with the Leaf, it’s not clear just how much the Nismo version will differ from the regular versions of the Leaf EV in terms of performance.

While the Leaf Nismo will develop more downforce, the drag coefficient will remain the same, and a set of special 18-inch alloys will help keep air resistance to an absolute minimum.

Other enhancements come in the shape of a set of Continental ContiSportContact 5 tyres with more grip than the Leaf’s normal rubber, a sport-tuned suspension, and custom steering, brake and stability tuning to promote better handling.

There are some obvious exterior styling enhancements to improve the car’s aerodynamics. On the outside there are signature Nismo emblems, custom lighting, a unique grille and front and rear bumpers, remote-control retracting black side mirrors and the usual Nismo signature red accents.

The red highlights also feature inside the car, where there’s an Alcantara-wrapped steering wheel, a faux-carbon finish on the instrument panel, custom gauges, and a special seat and door trim material with some attractive red and gray stitching.

But what everybody really wants to know is how fast the Leaf Nismo will be after a tuning computer gets to grips with it to provide what Nissan describes as “more responsive acceleration,” which it says will be “delicate but strong.”

Once people might have scoffed at the idea of a performance Leaf EV, but now we’ve seen just how fast electric cars can be thanks to the likes of the Nio EP9, there’s no reason for Nissan to be timid with the Leaf Nismo.

The Leaf Nismo will launch in Japan at the end of July 2018.