Toyota could have given bakkie closer resemblance to iconic Hilux racer. From time to time, this writer gets to pretend to be a race car driver and it involves participating in Historic Car events at the Zwartkops Raceway near Pretoria. At my age, I have no misconceptions as to why the car owner lets me loose in his irreplaceable 1966 GSM Dart.

I am so slow that I do not hit things when I go off the track.

That much, I understand. Other motorsport aspects, I do not.

For instance, when you enter for an event, you must fill in a long form under the watchful eye of the race secretary.

Apart from your identity number, address, race licence number and so forth, there is a box asking “Person to be contacted in the case of a medical emergency?”

I always write “A doctor”.

It bothers me that race organisers do not know that. Another thing. I once complained about my inability to drive around Zwartkops quickly and a well-meaning expert in the pits told me I simply needed more seat time. So, I sat in that Dart the whole night. Just so you know, at 3am the Zwartkops pit area is a lonely, cold and scary place.

And sitting in a car for 16 hours makes you no quicker behind its wheel – you just get a sore ass. I could never understand why that expert lied to me.

Which brings me to the limited edition Toyota Hilux Dakar.

I do not understand Toyota’s marketing strategy on this vehicle. Vehicle manufacturers love to point out direct links between their motorsport activities and production vehicle offerings.

Often, such links are tenuous – like Renault ascribing “F1 technology” to its 900cc road cars. Toyota, on the other hand, has impeccable bragging rights when it comes to the Hilux and the annual Dakar Rally.

For the last six years, the Toyota Hilux has finished in the top five places of the world’s toughest motorsport event.

That is amazing and the fact that the whole Dakar programme is run from South Africa makes it imperative for the company to offer a special Dakar edition on these shores. So they do, but the vehicle in question bears little resemblance to the Dakar racer.

The racer comes in a violent white, red and black colour scheme, sits high on its suspension, and boasts the world’s meanest looking sump guard, with the word “Toyota” cut out of the metal.

The Dakar limited edition Hilux we got to drive has none of the above. It does come with an all-new Hilux face, featuring a gloss-black-honeycomb grille with Dakar insignia, LED headlamps, a new bumper design with fog lights and a metallic grey “skid plate”.

In addition, the exterior sports some distinctive touches, such as gloss-black treatment for the door handles and power-retractable side mirrors, distinctive “Dakar” stickers on the side and rear, plus a grey rear bumper.

But surely there should be at least one variant that resembles the race vehicle more closely, in red, white and black livery, with an aggressive skid plate, wider wheel arches and air scoops on the roof?

Just asking. Do not misunderstand – the Hilux Dakar is a superb, tough erer than tougherer bakkie. 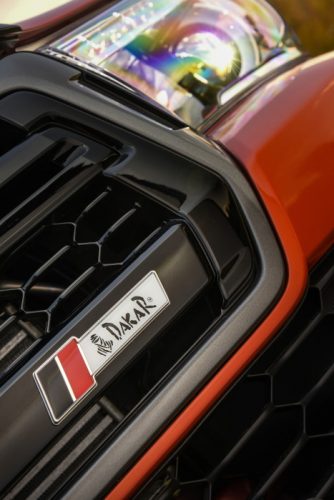 It is powered by a missile-proof 2.8-litre, four cylinder turbo-diesel engine that produces 130kW of power and 420Nm of torque, passed to all four wheels via a six-speed manual gearbox.

The unique instrument cluster uses white-faced gauges with orange needle pointers and bespoke graphics. Driving the bakkie was a pleasure.

Its tree-stump-pulling torque means you can use sixth gear in city traffic and it is an absolutely effortless cruiser, able to run at a steady 130km/h on the highway all day, with 2 000rpm on the clock in sixth gear.

It must have serious off-roading capabilities, but we only used it to get around in the concrete jungle, as most of its buyers will probably do. Which meant the show-off in me suffered, as other road users did not notice what an amazing legacy my vehicle represented. I yearned for red, white and black paintwork, air scoops and that wild skid plate.

I never tried to drive the bakkie frugally and was pleasantly surprised with an average fuel consumption figure of 9.6l/100km. Dutch driver Bernhard ten Brinke with his co-driver Michel Perin of France steers his Toyota during the Stage 10 of the Dakar 2018 between Salta and Belen, Argentina. / AFP PHOTO / FRANCK FIFE

Yet another great Toyota Hilux bakkie, but a bragging opportunity missed.