Since we only had the Changan for a few days, we did not do a fuel consumption test, but we would reckon it is pretty light on the juice, depending on its load. It was a dark and stormy night… I have hankered to use that opening line for a story all these years, but the right opportunity has never presented itself.

But here it is, all truthful and we can thank the combined efforts of Eskom and a violent Highveld thunderstorm. Where were we? Ah, yes … it was a dark and stormy night, leading to alarm and despondency among many Gauteng road users.

At dusk, I was on my way from the Zwartkops Raceway near Pretoria to my home in Alberton. Approaching Jozi, I could see massive pitch-dark rain clouds gathering over the city, with many lightning bolts adding to the spectacle. And, circling the city on the concrete highway, the rain came down with a degree of violence seldom seen outside of the Amazon basin.

I could not make out the sides of the road and traffic crawled along at around 4km/h, with hazard lights switched on. Approaching the Voortrekker Road on-ramp, I could also see that Alberton’s power was off. Again.

None of which inspired confidence when I took the sharp uphill on-ramp, to find it representing a waterfall more than a road.

A knee-deep torrent gushed down the incline and at least seven cars were stranded at the side of the road. But, my vehicle would not join them. It trundled through the troubled waters without the slightest hitch and I drove home in triumph. Also, in pitch darkness, but you can not have everything in an ANC-run country.

The vehicle that stood up to the harsh conditions so well? The Changan Star single cab bakkie. When it arrived at The Citizen Motoring’s garage, I immediately clamoured to test it. It is not often I get to drive two-seater, mid-engined vehicles and that is an accurate description of the entry-level Changan’s layout.

It sits on a basic Macpherson strut and leaf spring suspension, plus 14-inch steel wheels in 175/70R14LT rubber. It has a full size spare wheel and a 40-litre fuel tank. It is powered by a four-cylinder, 1 243cc petrol engine that produces 72kW of power and 119Nm of torque. 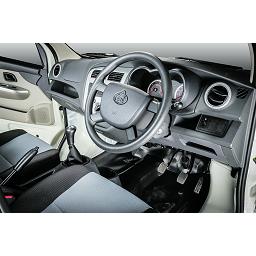 This is fed to the rear wheels via a five-speed manual gearbox. The engine sits under the cabin floor, almost exactly in the middle of the bakkie, underwriting my claims of driving a mid-engined vehicle. Though I loved the Changan dearly, one can not, in good faith, call it handsome. But, it was not designed to compete at Councours De Elegance get-togethers. It is a workhorse.

Which is why it sits high off the ground, has sturdy suspension, strong steel wheels, rubber coating in the load bin and even rubber-covered interior floors. The test vehicle, being the Lux model, sported some creature comforts. For instance, it boasted an air conditioner and heater, which doubled admirably as windscreen demisters during my trip through the storm from hell.

Surprisingly, it had electric windows, a radio with two speakers, a clock and an auxilary port. And, lest we forget, it proudly offered the use of a cup holder in the centre console. There is something reassuring about a vehicle one unlocks with a simple key, which doubles as a starting appendage. 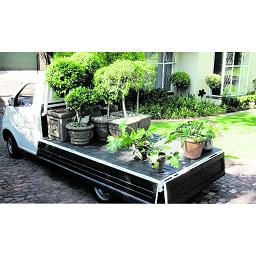 The Changan single cab does not have a lot of cabin space. With the front seat as far back as it could go, I was hunched over the wheel. Taking a passenger plus my racing gear and laptop to Zwartkops was always going to end up with my helmet, racing suit, boots and gloves getting soaked in the rear, while my companion and I rubbed shoulders in the cab. But, this being a working bakkie, stuff like the totally flat loading space and the fact that all of its sides can be folded down will be of more importance to potential buyers than interior comfort.

The Changan was, once one remembered it being a beast of burden, fun to drive. Fast it is not, but the little engine revved eagerly, the gearbox was slick and the brakes, discs front and drums rear, were efficient.

Since we only had the Changan for a few days, we did not do a fuel consumption test, but we would reckon it is pretty light on the juice, depending on its load. It will set you back R151 880 and comes with three year/100 000km warranty, plus 24-hour roadside assistance package.