The colour touchscreen provides the display for an integrated rear-view camera that makes parking maneuvers a cinch. I must start with a terrible admission. Two weeks ago Ford gave me one of their Figo Titanium models to evaluate – and I was too elderly to do so properly.

Do not get me wrong – though I am old, ugly, fat, full of bull and poor, I can still drive cars. Thus, I steered the little True Blue machine all over Gauteng, never scratched it and missed all the potholes while gaining a reasonably accurate idea of its performance, handling prowess, nimbleness and economy. 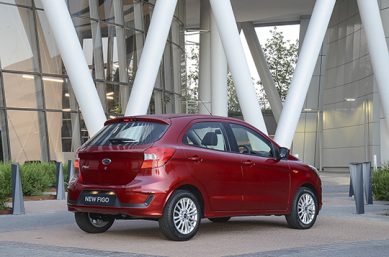 But, it turns out, those were not the things Ford wanted me to test. They fitted one of the Figo derivatives with a bunch of features aimed squarely at people with close and personal knowledge of computer mysteries.

In the process they created the Figo Titanium. Here’s what makes it special. It boasts Ford’s SYNC3 system, which allows the driver to control audio, multimedia, climate control and connected smartphone functions by using simple conversational voice commands, or by means of the integrated 6.5-inch colour touchscreen.

It has two USB ports to offer the benefits of smartphone integration provided through Apple CarPlay or Google’s Android Auto. This, they say, transforms the phone’s connectivity with the car to make and receive calls or listen to voice mail. Songs, playlists and compatible apps can also be accessed.

None of which I knew how to do. But a co-worker at The Citizen assures me Ford’s system works as well as those of much costlier luxury vehicles. He should know because his brother-in-law owns a Focus and often engages it in conversation, apparently to good effect. So, now you know.

On to the things I could actually understand. The Figo Titanium is available exclusively in five-door hatch guise, distinguished from its lower-specced brethren by means of 15-inch alloy wheels, chrome accents for the front fog lamp bezel and a chrome finish for the front grille surround.

It is powered by a normally-aspirated three-cylinder 1 498cc 1.5-litre petrol engine that engages twin independent variable camshaft timing and four valves per cylinder to deliver 88kW of power at 6 300rpm, plus 150Nm of torque at 4 250rpm.

That goes to the front wheels via a five-speed manual gearbox. Brakes are discs front and drums rear, complete with anti-lock braking system and electronic brakeforce distribution. Inside, it comes with electric front windows, perimeter anti-theft alarm and factory-fitted immobiliser, electric power steering, tilt adjustment for the steering column and headlight level adjustment. 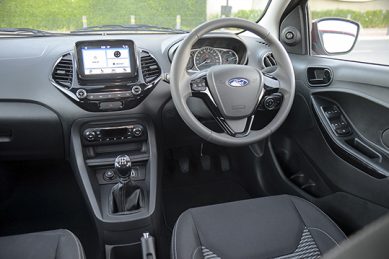 Should they still manage to crash, it offers dual side and fulllength curtain airbags in addition to the front airbags. It was easy to drive, with the steering weighted just right. Its manual gearbox was slick and precise – something that reminded me of a misspent youth in an Anglia and various Escort derivatives.

Ford made good gearboxes back then, and they make good gearboxes now. With a turning radius of just 5.1m, the Figo was nimble and easy to maneuver through tight gaps. It is not a fast car but can hold its own in traffic. Ford claims a top speed of 175km/h and acceleration from 0-100km/h in 11.8 sec and we have no reason to dispute their figures.

The Figo does not need more performance since its most likely buyers are first-time owners, housewives or last-time owners who want to retire with a nice, affordable, fuel-efficient little car. And fuel-efficient the Figo Titanium is. After using it primarily in city traffic, without attempting to drive it frugally, we managed an average usage of 6.2l/100km. 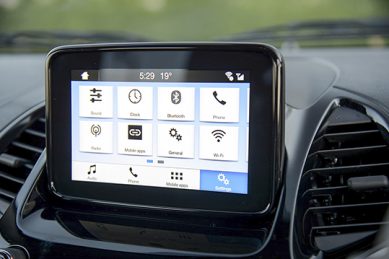 Other random things we liked: it has a full-sized spare wheel, a 42-litre fuel tank, front and rear tow hooks and a light in the luggage compartment.

Maybe, one day, when I find favour with the Lotto gods, I will be able to afford a fancy phone and pay somebody to show me how to use it. Seems I will have to do that if I wish to continue driving cars as part of my job. The Figo 1.5 Titanium will set you back R215 900.