SA’s most popular double cab gets a nip and tuck, and it’s a beast

Both the 2.0-litre Bi-Turbo and 2.0 Single Turbo engines are exclusively available with the sophisticated 10-speed automatic transmission, which has proven performance and durability in both the F-150 pick-up and the new Mustang. When you operate in a cut-throat industry you can never afford to rest on your laurels, even if you’re ahead of the pack.

And that is exactly Ford’s approach to the new Ranger. Leaving nothing to chance, Ford wasn’t content on being the local market leader in double cab sales with its previous offering and has thrown down the gauntlet in this tough light domestic vehicle segment with the new version of the popular bakkie. 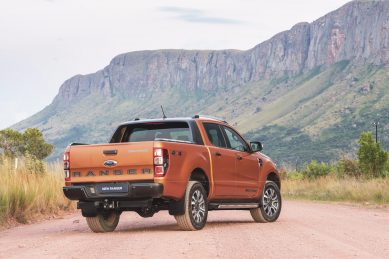 But the manufacturer isn’t changing for the sake of changing alone and therefore Ford has kept the striking good looks that made the bakkie such a familiar sight on our roads in the first place, with most of the upgrades what they call “under the skin”, while the spec set of the XLS grading, in particular, has also been adjusted.

With these changes Ford not only hopes to strengthen the Silverton assembled Ranger’s grip as the most popular local double cab, a lead that Toyota Hilux has eaten into in recent years, but also hopes to close the Hilux’s gap as the No 1 selling super cab and gain ground on both the Hilux and Isuzu’s D-Max in the single cab segment.

As part of its push for bigger double cab market share, Ford hopes to lure potential buyers away from the SUVs with its adjusted XL and XLS grading. As far as looks go, apart from a few minor range specific exterior tweaks up front – including grille, bumper and headlight changes – the big changes are in the form of mechanical, technological, feature and comfort upgrades.

And the most prominent of these include the introduction of the all-new 2.0-litre Bi-Turbo and Single Turbo diesel engines – both built at Ford’s Struandale Engine Plant in Port Elizabeth, a new 10-speed automatic transmission and a revised suspension set-up.

Topping the new engine range will be the 2.0 Bi-Turbo engine which is available on the Wildtrak and will also power the soon-to-be-launched Ranger Raptor.

The Bi-Turbo engine relies on a variable-geometry high-pressure turbocharger along with a fixed-geometry low-pressure unit to produce an impressive 157kW of power and 500Nm of torque from 1 750 to 2 000rpm.

The 2.0 Single Turbo engine, offered on the Double Cab XLT 4×4 and 4×2 derivatives, has been specifically designed to deliver more performance at lower engine speed compared with the current 2.2-litre TDCi engine. It produces 132kW and 420Nm between 1 750 and 2 500rpm.

The popular five-cylinder 147kW/470Nm 3.2-litre Duratorq TDCi engine will still be available in Wildtrak and XLT specification on the double cab derivatives, as well as XLT and XLS models in the SuperCab range. The trusted 2.2-litre TDCi engine remains a key part of the new line-up in the Single Cab, SuperCab and Double Cab models.

It will continue in the two existing levels: 88kW/285Nm with a five-speed manual gearbox for the base-spec models and 118kW/385Nm for the more upmarket versions, which are available with a choice of six-speed manual and automatic transmissions.

Both the 2.0-litre Bi-Turbo and 2.0 Single Turbo engines are exclusively available with the sophisticated 10-speed automatic transmission, which has proven performance and durability in both the F-150 pick-up and the new Mustang. A wider spread of ratios and high-tech features, including real-time adaptive shift-scheduling that allows the transmission to adapt to changing conditions, enable the optimal gear to be selected for performance, fuel-efficiency or refinement. Additional innovations include the Progressive Range Select that has an Select Shift Transmission button, which locks out selected gears from the automatic shifting range, which can be beneficial when towing, driving in slippery conditions or climbing a steep gradient.

Improvements to the overall ride quality has also been significant, with key changes including the relocation of the front stabiliser, or anti-roll bar, from the tight confines in front of the fully independent suspension to a new position behind the axle.

And the ride quality was as plush as you could expect while tackling seriously rocky tracks over the Outeniqa Mountains outside George during our launch drive last week.

The Wildtrak continues to be offered with leading active safety features that includes Adaptive Cruise Control with Forward Collision Alert, Lane-Keeping Alert and Lane-Keeping Aid, and Auto High Beam Control. Semi-Automatic Parallel Park Assist, which is currently available on the Everest, is now standard on the Wildtrak.

SYNC technology remains the cornerstone of the entertainment system. XLT and Wildtrak models are equipped with the high-end SYNC3 with Navigation, linked to the integrated eight-inch touchscreen colour display.