The trim on the door panels, dash and centre console blends in together splendidly to create a luxurious and extremely posh atmosphere. I once had the privilege to be chauffeur driven from the Chennai International Airport in India to my hotel.

Not to be mistaken for a standard shuttle service or an Uber, this was a proper chauffeur man. Like the Patrice Motsepes and Johann Ruperts of this world go about their business.

The chauffeur was clad in his white suit and black hat and was holding the placard with my name on in the arrivals terminal. After sitting me down in the rear of a gigantic German sedan, he handed me a menu-like file with a leather cover.

The first page said “in-car entertainment”, followed by 10 pages of CD covers each with the tracklist printed out.

I just had to find a track of my liking and tell the driver so he could find the corresponding CD and play the desired track. And while I sat and enjoyed Beethoven’s Symphony No 9, I could leisurely page through the five crisp newspapers in the pocket of the seat in front of me. 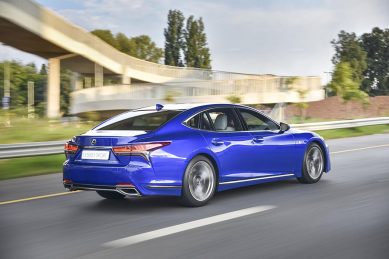 The discerning businessman would have probably dived straight into the stock market numbers, but I was a journalist wearing jeans and sneakers and haven’t got a clue what’s going on in Wall Street.

When a Lexus LS 500 F Sport was delivered to our office last week, I couldn’t help but think back to that surreal experience in Mumbai.

The only snag was I had to drive the Lexus myself. Being Lexus’ flagship model, the LS 500 sedan is basically a cruiseliner and not much smaller or lighter than the MS Queen Elizabeth. The LS 500 is all of 5 235mm long, 1 900mm wide, has a wheelbase of 3 125mm and weighs 2 670kg.

The whale of a body is pulled along by a 3.5-litre naturally aspirated V6 petrol engine which goes through the rear wheels and is mated to a 10-speed automatic gearbox. The engine produces 310kW at 6 000rpm and 600Nm of torque. Although it’s not the type of car associated with street racing, there is enough power to pull the chunk of metal along at a brisk pace should the need arise or when tempted to engage the Sport and Sport+ driving modes. Lexus claims it will go from zero to 100km/h in 5.0 seconds with a top speed of 250km/h and we have no reason to doubt them.

Safety is the last thing you think about as the LS 500 feels as solid as a cruising jumbo jet at high speeds, but it is equipped with an impressive list of features. The amount of space offered inside will blow anyone away. Not only does it offer great amounts of legroom, but it has an enormous boot measuring 480 litres. The white leather interior our test unit was fitted with made it look bigger inside than it actually is, and it’s pretty big even before adding aesthetic illusions.

The trim on the door panels, dash and centre console blends in together splendidly to create a luxurious and extremely posh atmosphere. The soft-leather steering wheel completes the picture in the driver’s seat, fitted to the brim with buttons to control almost every one of the car’s endless features, with the added benefit of HeadUp display. And although anything will sound good on the 23-speaker Mark Levinson sound system with 3D surround sound, together with the rest of the sophisticated interior, it just dictates a bit of soul-soothing classical music.

With Lexus’ hallmark quietness inside the cockpit, every note whether a violin chord or suprano place you in the front row of the opera house. And while driving the LS 500 F Sport is an amazing experience, sitting in the back is almost better. Complete with acres of legroom, heated and ventilation seats which is fitted with their own settings alongside the four zone climate control, large reading lamps in the roof, a very comfy armrest with drinks holders and USB ports.

It’s only when you indulge in the comfort the rear has to offer when you realise that those seats are not fully equipped for the owner’s leggy teenagers or to give his basketball buddies a lift home after practice. It’s for him or herself to prepare for the board meeting or reminisce over a day of soaring stock prices. With Mozart a voice command away.