Two decades ago, an international poll was undertaken to determine the most influential car of the 20th century. Ford’s Model T topped the chart, followed by Mini, the Citroen DS, Volkswagen’s Beetle and the Porsche 911. Out of those five only one, the 911, is still in production. And judging by its latest reincarnation in the guise of model number 992, the iconic 911 is true to Porsche’s catchphrase of “timeless machines”.

What makes the latest generation – only the eighth since its debut in 1964 – special, is the fact that Porsche’s designers managed to marry serious technology with good old-fashion virtues that contributed heavily to the car’s iconic status. The result is a highly advanced car not only meeting today’s digital demands, but staying true to its DNA as a puristic sports car.

Distinctive features from previous generations relived in the new 911 include a forward-extended bonnet with a recess in front of the windscreen. The list of improvements includes the use of significantly more aluminium than steel in the outer construction, a new engine and gearbox, the Wet Mode driving system, which is a world first, LED headlights, Night Vision Assist, a newly structured rear, featuring a continuous LED light strip and distinctive third brake light, plus revamped front seats, the traditional analogue rev counter now flanked by two frameless freeform displays, a 10.9-inch touchscreen display and standard Porsche Communication Management features that include online navigation as well as Porsche Connect Plus.

All four derivatives, the Carrera S and 4S Coupes and Carrera S and 4S Cabriolets, feature the next generation of flat-six 3.0-litre turbocharged engines mated to a newly developed eight-speed dual-clutch transmission. 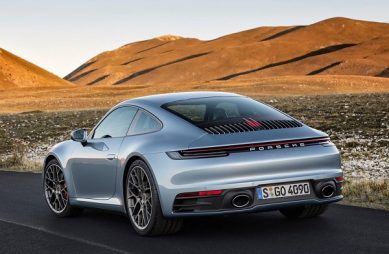 Porsche lists the top speed for the 4S at 308km/h and 306km/h for the S. Apart from the obvious thrill that goes with chasing these numbers during our launch drive around the picturesque Western Cape last week, the sound delivered by the 911’s powerplant enhances the driving experience all the more.

The Wet Mode is included as standard across all derivatives. This function detects water on the road, preconditions the control systems accordingly and warns the driver, who can then set the car up to focus on safety by simply pushing a button or using the mode switch on the steering wheel (with optional Sport Chrono Package). And the water kicked up proved a sufficient trigger for the system on our launch drive. 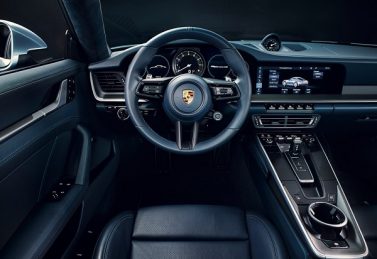 By activating the Wet Mode system, the Sport and Sport Plus driving modes are disabled until the water clears up. Night Vision Assist with a thermal imaging camera is optional for the first time. Using an intelligent thermal imaging camera, the system detects persons and animals in darkness up to 300m and shows them to the driver.

This results in a track that is 46mm wider at the front, as well as a 39 mm-wide track width at the rear of the 911 Carrera S. This combination enables the rear axle to build up higher lateral stability, and further improves the traction of the rear-wheel-driven 911, something I can attest for after guiding the new 911 over some twisty mountain passes.

Overall, the new 911 is simply superb. And if you have longed to own any of the first seven generations, your temptation will only grow bigger seeing the eighth reincarnation.