Ford Ranger 2.0 SiT XLT: This two-litre is no joke

After Volkswagen introduced their 2.0-litre TSI and 2.0-litre TDI Amarok a number of years ago, there can’t be a bakkie person in South Africa who hasn’t come across the “only thing that comes in two litres are milk and Coke” jokes. Ironically you can joke as much as you want, those Amaroks were and are actually very good in terms of performance. And with people trying to save the world just as fast as other people are destroying it, the drive for more efficient engines is seeing everybody downscale the cubic capacity of their offerings. Sure you still get powerful 3.0-litre V6 bakkies in South Africa, but they are right at the top end of the price scale that has now hit the R1-million mark.

Mass-market offerings are seeing 2.8-litre, 2.4-litre, 2.2-litre and now another 2.0-litre single turbo and bi-turbodiesel offering from Ford hitting the market in their recently upgraded Rangers. I haven’t driven a run-of-the-mill Ford Ranger in ages.

I did recently drive the Ranger Raptor dirt-eating machine, but that doesn’t really count, so I was eager to get my hands on the R570 200, 2.0 SiT XLT 4×4 that arrived for testing. The Ford Ranger has been the only bakkie that has been able to give the Toyota Hilux a run for its money when it comes to units sold each month – in fact, the Ranger has achieved the near impossible and beaten the Hilux into second place on the odd occasion.

It’s not a cut-and-dry affair, the trend remains that the Ranger Double cab is the one doing damage to Hilux, whereas the Hilux single cab comprehensively claws this advantage back and the club cab models fight it out for a draw. With this in mind, it will come as no surprise, then, that the exterior, interior and mechanical changes have mostly been concentrated on the higher-end double cab models. 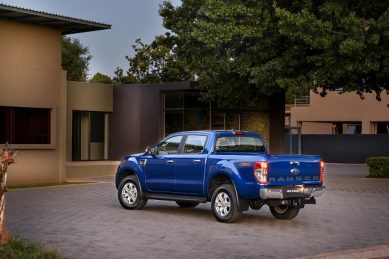 You might not believe me, but if you know your Rangers and you look closely, the exterior has been given a tweak. As has the interior. But the big news is the locally assembled, smaller capacity 2.0-litre, four-cylinder turbos and the 10-speed automatic transmissions. Both engines are said to offer superior performance, fuel efficiency and a significant improvement in overall refinement with lower noise, vibration and harshness levels, compared to the outgoing engine range.

Our XLT 4×4 test bakkie ran the 2.0-litre single turbo engine, which is also offered on the 4×2 derivatives. This is a compact single variable-geometry turbocharger that has been specifically designed to deliver more performance at lower engine speed compared with the current 2.2-litre TDCi engine. And I have to agree, this 132kW/420Nm setup does deliver a responsive yet easy going surge of power that makes for a pleasant everyday drive.

The 10-speed gearbox is as smooth as one can expect, although I did joke that I never got out of fourth gear in and around the suburbs. But the fuel consumption seldom went over 10l/100km driving around like this either, so I guess this is another win. 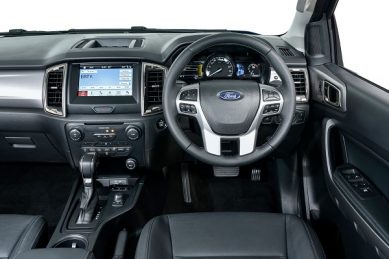 Shifting the lever of the XLT into sport mode felt like it merely changed the D to an S on the instrument cluster, as not much changed in terms of the rate of forward momentum, but you have to take into account that this isn’t the 157kW/500Nm, 2.0-litre bi-turbo or old 147kW/470Nm, 3.2-litre version that remains in the range by the way, it’s a competent middle-of-the-road offering.

I did feel that hardcore towing people might opt for the higher output engines. The Ranger’s towing capacity of up to 3 500kg remains unchanged, as do the 800mm water wading depth and 230mm ground clearance though. The safety package offered is comprehensive, with the likes of Electronic Stability Control system with Traction Control, Trailer Sway Control, Hill Start Assist, Hill Descent Control, Adaptive Load Control and Roll Over Mitigation.