The initiator of the full-size turbodiesel pick-up in North America when it launched the EcoDiesel derivative of the standard 1500 model in 2008, Fiat-Chrysler Automobiles (FCA) owned Ram has revealed details of the latest model set to go on sale later this month. Coming just over a week after General Motors (GM) unveiled the oil-burning version of the Chevrolet Silverado 1500, the Ram 1500 retains the VM Motori sourced 3.0-litre V6 engine cleared of emissions cheating some 12 months ago, albeit upgraded with a water-cooled variable geometry turbocharger, a newly designed exhaust gas recirculation (EGR) system, lightweight aluminium pistons, a two-piece oil sump whose lower portion is made from a lightweight polymer/metal material, and a new mechanical low-friction pump with revised blades.

Combined with a raised compression ratio and redesigned injector nozzles, the motor now produces 190kW/600Nm as opposed to 177kW/570Nm, and also comes with the 48-volt eTorque mild-hybrid system introduced on the standard Ram that bowed at the North American International Auto Show in Detroit last year. 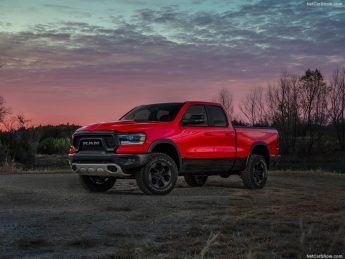 Mated to an eight-speed TorqueFlight automatic gearbox, the EcoDiesel offers up 16kW/24Nm less than the Silverado’s Duramax straight-six, but four kilowatts and four Newton Metres of torque more than the 3.0-litre Powerstroke V6 used in the Ford F-150. No fuel consumption figures were however released with FCA claiming a towing capacity of 5 697 kg.

In addition to being offered across the entire Ram line-up, the EcoDiesel will for the first time also be available on the off-road focused Rebel (pictured in red) model that rivals the Silverado Trail Boss and the petrol only Toyota Tundra TRD Pro.

Like the regular 1500, production of the EcoDiesel will take place at FCA’s Sterling Heights Plant in Michigan with pricing still to be announced, though like with previous generations, the F-150 and Silverado, it will only be offered in left-hand-drive.