We did more than 4 000km in our Toyota Corolla Hatch XR CVT, covering all sorts of roads, from the school run to playing dodge on our highways, to hitting the open road for a trip to the Free State. Now, 4 000km might not sound like a lot of mileage, but it is around 10 times more than we would do in a normal week-long driving impression. Three months have come and gone and our cool Corolla is on its way back to Toyota.

Of course, you expect me to say that this extended drive went on without a hitch. And it did, after all this is Toyota. During this time, the part that impressed me most was the engine and gearbox combination. It’s no secret that the Constant Variable Transmission (CVT) is a modern-day torture device and should be banished to a life on a lawnmower or a blender at home. But in the Corolla Hatch, Toyota have nailed it.

The peppy and little 1.2l 85kW/185Nm turbocharged engine matches perfectly with their CVT transmission in normal driving, which is what you would do most of the time in a car like this. Should you wish to hustle a little, the claim to 100km/h is less than 10 seconds along with a top speed of 190km/h and only then will you be reminded that you are driving a whining, dumb CVT.

The recorded average fuel consumption came in at just under 7.0l per 100km over the three months and there is nothing wrong with that in the real world. The good news continues in the handling department. 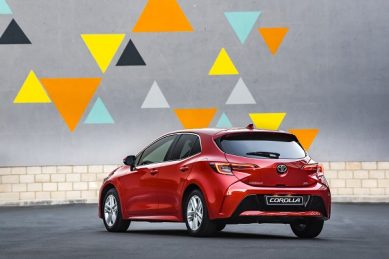 Who would have thought good looking and good handler would have been used to describe a Corolla? But it’s true, thanks to a lighter but a stiffer body along with a revised Macpherson strut front suspension and an all-new multilink system at the rear, this car is fun to throw around. As a car that will mostly be used to commute out in the urban jungle, it’s also good to know that Toyota has not skimped on the active and passive safety front.

You get driver, passenger, side, curtain and driver knee airbags; standard fitment Vehicle Stability Control; and a full suite of electronic aids like ABS, EBD, Brake Assist and Hill-assist Control. There is one downside to this car, and that is the infotainment system. In this day and age where a car is as connected to the electronic world as you are with your smartphone, the system in the Corolla Hatch is positively prehistoric, which is weird for the tech savvy Japanese.

You can’t even get Apple CarPlay, so you have this big digital screen in the dash that is basically only used for basic audio and telephone functions. But if this is a deal breaker for you, you can always go out and buy a fancy GPS-equipped unit.

At R367 100, the Corolla Hatch XR CVT which includes a six service/90 000km service plan and a three-year/100 000km warranty, is competitively priced and did exactly what we expected of it during its time with us.