After a fairly short teaser campaign that kicked-off at the beginning of this month, Kia has now officially unveiled its Seltos small crossover heading for markets during the second half of this year. Directed very much at developing markets with production set to take place at Kia’s Andhra Pradesh Plant in India and in Gwangju, South Korea, the Seltos adopts a variation of the Rio’s styling language with a split LED headlight design, a Telluride inspired Tiger Nose grille with a silver skidplate integrated into the front bumper, and an upwards moving rear window line with the rear facia seemingly being inspired by that of the Jeep Compass.

Boasting full LED taillights with optional LED fog lamps, the Seltos will have the option of 16, 17 or 18-inch alloy wheels and according to Kia, “the space and capabilities of a traditional SUV – all in a compact package”.

Oddly, no interior images were revealed, though Kia has confirmed that the Seltos will feature a “bold design” and include items such as a 10.25-inch touchscreen infotainment system with Apple CarPlay and Android Auto, an ‘”ergonomically sound” layout, eight-inch Heads-Up Display, eight-speaker Bose sound system and Kia’s Sound Mood Lighting system with eight custom colours and six cabin illuminating hues. 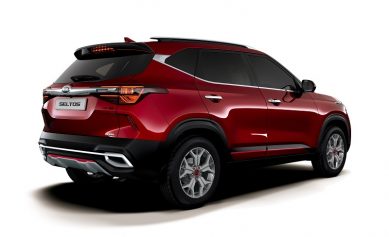 Motivation meanwhile will come from two petrol engines and a single turbodiesel; the former consisting of a 110 kW normally aspirated 2.0-litre and a 1.6 T-GDI producing 130 kW, and the latter a 1.6 CRDI outputting 100 kW.

Depending on the market, transmissions will be made up of a six-speed automatic, a seven-speed dual-clutch and a CVT with drive going to the front wheels only. No mention of a manual ‘box was made.

While exact spec and pricing details have not yet been announced, Kia Motors South Africa has confirmed that the Seltos will make its local market debut sometime in 2020.