New leaked images preview next Land Rover Defender inside and out

Reportedly set to make its long awaited debut at the Frankfurt Motor Show in September, the all-new Land Rover Defender has allegedly been shown in full thanks to a clutch of new spy images. While the Indian-owned British automaker has already previewed the Defender undergoing testing in Kenya earlier this year, the latest snap by the LandRoverPhotoAlbum Instagram page (below) now confirms what has been expected all along.

Taken from the instrument cluster, itself being the same TFT unit available in other Land Rover models, the digital image shows the Defender being similar to the DC100 concept of eight years ago, in that it retrains the boxy styling as well as the Range Rover-like side vents and expansive blacked-out C-and-D-pillars. Traits carried over from previous Defenders and Discoverys includes the glass roof panels and the tailgate mounted spare wheel. 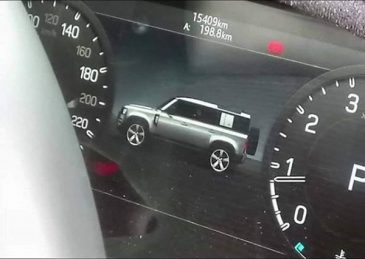 Said to have undergone 1.2-million kilometres of testing in conditions ranging from 50 degrees to -40 degrees Celsius and at altitudes of up to 10 000 feet (3 048 metres), the Defender will ride on an all-new platform called the Modular Longitudinal Architecture (MLA) that can support not only petrol and diesel engines, but also a plug-in hybrid and full-on electric motors.

As evident by the prototypes shown and numerous spy images that have leaked online in recent months, the Defenders will be offered in short wheelbase 90 and long wheelbase 110 bodystyles with Britain’s Autocar reporting that it will feature a monocoque chassis made mostly from aluminium.

Power will mostly likely come from the 2.0-litre Ingenium turbocharged petrol and diesel engines, though a six-cylinder variant of both is possible along with the rumoured hybrids.

Meanwhile, first images of the interior has appeared online with the snaps taken by Autoblog showing a rugged dashboard, the aforementioned digital instrument cluster and the Touch Pro infotainment system positioned above the control panel with a series of chunky buttons integrated into the lower facia.

As evident by the high mounted, stubby gear lever derived from the Evoque and the Jaguar XE, the Defender will have the option of an automatic gearbox for the first time, though expect a manual ‘box to feature on lower-end models with Land Rover’s Terrain Response 2 system set to be included as well.