Not letting up after launching the Seltos last week, Kia has pulled the plug on yet another of its teaser campaigns by taking the covers off of the new XCeed crossover that arrives in Europe later this year. Claimed by the South Korean automaker to combine the “compact SUV practicality with the sporty packaging and engaging handling of a hatchback”, the XCeed slots-in between the Stonic and Sportage in Kia’s crossover/SUV line-up, with a slightly higher ground clearance and longer length than the Ceed hatchback and the fastback-styled Proceed.

Accordingly, the XCeed measures 25 mm longer at the front and 60 mm at the rear than the standard Ceed, while the ground clearance comes in at 174 mm when fitted with the 16-inch alloy wheels or 184 mm with the 18-inch alloys, a lift of 42 mm compared to the Ceed. In addition, its 1 826 mm width makes it 26 mm wider than the hatch.

Inside, the XCeed’s interior design and layout mirrors that of its siblings with notable tech being an eight-inch touchscreen infotainment system with Apple CarPlay and Android Auto, a brand-new 12.3-inch digital instrument cluster and an optional 10.25-inch touchscreen display. 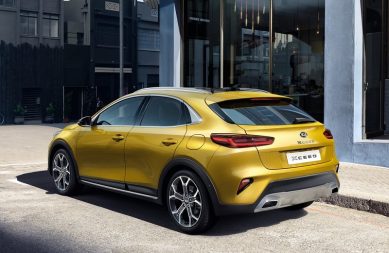 Depending on the trim level, the XCeed’s spec sheet will include items such as heated and folding electric mirrors, dual-zone climate control, a heated windscreen, a JBL Premium sound system, heated steering wheel, an electric tailgate and heated and ventilated front seats with the rears being heated only.

Compared to the Ceed and Proceed, Kia has also tweaked the XCeed underneath with a model specifically tuned suspension made up of hydraulic rebound stoppers, softer front and rear springs and a new damper for the rear cross-member.

In addition, it also comes with Kia’s Drive Select Mode system with two modes; Normal and Sport, and a retuned Electronic Control Unit for the power steering. Up front, the XCeed will touchdown on the Old Continent with a choice of three T-GDI petrol engines and a single Smartstream turbodiesel with a plug-in hybrid and mild-hybrid arriving next year.

The oil-burning Smartstream motor meanwhile comes in two states of tune; 85 kW and 100 kW with all models, bar the manual only 1.0 T-GDI, having the option of a six-speed manual gearbox or a seven-speed dual-clutch. In spite of its SUV-like looks, the XCeed will be front-wheel-drive only.

Made at the same Zilina factory in Slovakia as the Ceed and Proceed, the XCeed will officially go on sale in Europe from August, but has been classified as a European market only model, meaning it will not be offered in South Africa anytime soon.