Having already showcased the Megane RS Trophy earlier this year, Renault this past weekend whipped the covers off of the most extreme iteration of the current generation Megane to date, the RS Trophy-R. Limited to just 500 units worldwide mostly aimed at European markets such as the United Kingdom, France, Germany and Switzerland with Japan being the key Asian market, the Trophy-R, which Renault claimed has set a new front-wheel-drive lap record of seven minutes 40.1 seconds around the Nürburgring, comes in at 130 kg lighter thanks to numerous weight saving measures.

Central to the weight loss externally which brings the kerb mass to 1 306 kg, the Trophy-R gets a carbon composite bonnet that cuts weights by eight kilograms, a hollowed out, opaque grille, lightweight 19-inch Fuji Light alloy wheels that are two kilograms lighter each and wrapped in Bridgestone Potenza S007 tyres, a carbon fibre diffuser, a new blade at the base of the front bumper, optional RS Vision headlights that results in a further two kilogram weight save, a lead Dual Energy Storage System (DESS) battery with a lighter by 4.5 kg lithium DESS unit optional and an Akrapovic titanium exhaust that helps reduce weight by a further six kilograms. The biggest changes are however underneath the skin where the rear axle has been redesigned and the 4Contol rear-wheel steering system dropped to save 32 kg, while the front suspension has revised geometry and the Torsen limited slip differential carried over from the Trophy.

While fitted as standard with Brembo steel brakes whose 355 mm front discs have a four-piston caliper setup, buyers have the option of the upgraded carbon ceramic items with gold painted four-piston calipers and discs measuring 390 mm. In addition to this, the Trophy-R comes with recalibrated ABS and ESP systems, as well as Öhlins dual flow dampers and brake ducts to cool the new stoppers. 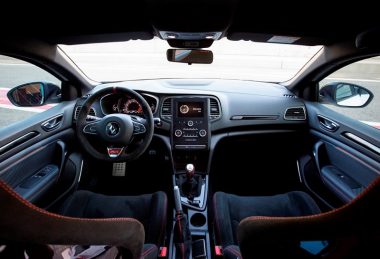 Inside, the weight saving continues with the removal of the rear seats in favour of a strut brace to save three kilograms, while the actual boot floor is also thinner so as to save a further 1.3 kg. Also gone is the rear wiper and motor for a three kilogram reduction and the 8.7-inch R-Link touchscreen infotainment system, through the smaller seven-inch system has been fitted to save 250 g in addition to the reverse camera.

Capping the interior off are thinner glass and front window glazing to save one kilogram, sealed rear windows and Alcantara trimmed monocoque Sabelt racing seats with an optional six-point harness with Renault Sport colours that trims a further six kilograms off of the kerb weight. No changes to the drivetrain have however taken place with the retention of the 221kW/400Nm 1.8-litre turbocharged engine that powers the Trophy, as well as the six-speed manual gearbox with the seven-speed EDC not being offered again due to weight saving. Top speed is rated at 262 km/h with the 0-100 km/h dash taking 5.4 seconds.