Ford Everest throws down the gauntlet

Competing with the Toyota Fortuner that found an astounding 1 410 new owners in June alone is no easy feat. But Ford reckons the upgraded Everest will go a long way in closing the gap on the most popular body-on-frame SUV in South Africa. As in the case of the updated Ranger with which the Everest shares a chassis, the most important tweaks in the new model range are under the skin. The all-new 2.0-litre bi-turbo and single turbo engines top the bill and are both exclusively mated to a 10-speed automatic gearbox, which all made their debuts in the new Ranger.

The 2.0 bi-turbo engine produces 157kW of power and 500Nm of torque and this combination is offered in the XLT 4×2 and 4×4 derivatives, as well as the top-of-the-range Limited model.

The new engines are said to have low noise, vibration and harshness levels. Ford adds that the 10-speed gearbox reduces the gaps in available power and acceleration between gears. This means smoother acceleration response and improved performance at lower engine speeds. And the combination offers a decent improvement in fuel economy, with the new top-spec model said to be nine percent more efficient than its predecessor. 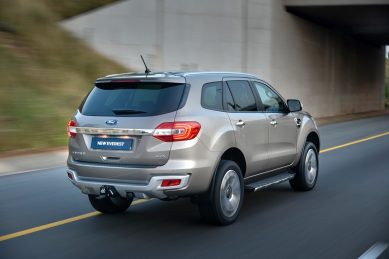 As with the Ranger, the new engines are built at Ford’s Struandale Plant in Port Elizabeth before finding their way to the model’s assembly line in Silverton. Suspension improvements have also been made, with the front mounted stabiliser moved to the rear of the front axle. This contributes to an increase in diameter and stiff ness to give the Everest improved roll control and handling performance, providing. This allows for a more comfortable ride.

To showcase the plush ride in the new Everest, Ford held the car’s official media launch in Botswana last week on a variety of terrains. These included sand and gravel roads along the Okavango Delta, smooth tarred roads, treacherous potholed tar roads and twisty jeep tracks along the Kgalagadi Transfrontier Park’s salt pan.

The make-up of the route wasn’t to showcase the Everest’s capabilities in the most extreme conditions, as the new Ranger has already ticked all those boxes crossing the Outeniqua Mountains on seriously rocky roads a few months back. It was to let drivers and passengers experience the comfort and ease with which the SUV tackles environments Everest owners with families and their luggage are most likely to travel in as opposed to serious bush-whacking.

During the Botswanan trip, we only had to engage low range once during a rocky river crossing, while the car’s 225mm ground clearance ensured a very enjoyable ride on most dirt roads without use of the sand mode setting.

On the long stretch of tarmac between Maun and Gweta, the car was as comfortable as one can expect from Ford’s premium seven-seater SUV, taking into account the convey didn’t risk the long arm of the law as Botswana police are not as easily persuaded as the traffic cops we are used to. Sticking to the speed limit helped with returning fuel consumption of less than 9-litre/100km, which wasn’t far off Ford’s claim of 7.6l/100km for bi-turbo models.

Apart from the drivetrain, transmission and suspension, other enhancements to the new Everest include a refreshed grille and redesigned lower bumper, 20-inch wheels for the Limited, subtle design tweaks in the cabin, including a new gear shifter design for the 10-speed auto box, Passive Entry and Passive Start system on the XLT and Limited models and SYNC3 with Navigation as standard on the XLT and Limited models.

Apart from the car’s obvious competitors in the Fortuner, Isuzu MU-X and Mitsubishi Pajero Sport, Ford is of the opinion the new Everest can rival Toyota’s Land Cruiser Prado taking into account the number of features the Limited derivative offers compared to the Prado 3.0 DT TX 4×4 at almost R100 000 less.

This comparison might be a bit of a stretch given the Prado’s renowned off -road prowess, but most Everest owners will probably never go off tarred surfaces, which puts superior creature comforts during rush hour ahead.