Having debuted as the first Jeep pick-up for over 30 years at the Los Angeles Auto Show in November last year, Fiat-Chrysler Automobiles (FCA) has now revealed the European-spec version of the new Gladiator. Reviving a name last used from 1963 to 1987, the Gladiator effectively serves as a replacement for the XJ Cherokee-based Comanche that ended production in 1992 and which remains largely unchanged from its Stateside-cousin in EU guise.

As indicated by its looks, the Gladiator is based on the new Wrangler, but with its platform having stretched by 492 mm to accommodate the loadbed behind the C-pillar, which Jeep claims has a payload of 725 kg, comes with an optional 230-volt power socket, electric locking tailgate and tie-down hooks integrated into the bed itself.

Able to tow 2 722 kg, the European Gladiator carries over the so-called Freedom Pack that allows for the roof and doors to be removed completely and the window folded forward. On the flagship Rubicon model, the roof consists out of three panels while on the base Sport and mid-range Overland, the top is colour coded instead of black. 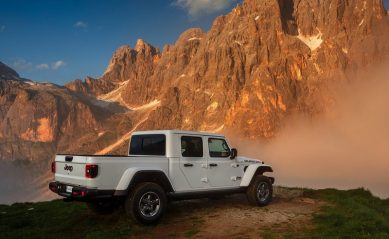 Inside, the interior is unchanged from the US Gladiator with the choice of either a 3.5-or-seven-inch TFT instrument cluster display, a seven-or-8.4-inch UConnect infotainment system with Apple CarPlay and Android Auto and notable safety items such as Forward Collision Warning, Blind Spot Monitoring, Rear Cross Traffic Alert, Adaptive Cruise Control, front and rear parking sensors, a forward facing off-road camera, Rollover Mitigation and a reverse camera.

Underneath the bonnet is the biggest difference with all European models coming powered by the 3.0-litre CRD V6 turbodiesel engine that produces 190kW/600Nm. Heading to North America under the EcoDiesel banner next year, the V6 will be paired as standard to an eight-speed automatic gearbox.

Outside of Europe, FCA will only offer the 3.6-litre Pentastar V6 petrol that produces 210kW/347Nm, itself paired to the eight-speed ‘box with the six-speed manual being limited to base North American models only. Although four-wheel-drive is be standard on the Gladiator, FCA has provided a choice of two systems; the Command-Trac 4×4 active-on-demand system on the Sport and Overland that has a 2.72.1 ratio low range ‘box and a heavy duty Dana 44 front and rear axle, and the Rock-Trac system on the Rubicon that features 4.1 ratio, Tru-Lok locking differential, a heavy-duty steel rear bumper, optional steel front bumper with winch compatibility and 32-inch off-road wheels.

Further equipped with front and rear towing hooks, Jeep claims an approach angle of 43.6 degrees, breakover of 20.3 degree and departure of 26 degrees with a rated ground clearance of 282 mm and wading depth of 760 mm.

Like the US Gladiator, production of the European model will take place at FCA’s Toledo, Ohio Plant with sales starting towards the end of next year. Although speculation is that the South African market Gladiator will mirror the version destined for the Old Continent, no confirmation from FCA South Africa has yet been made.